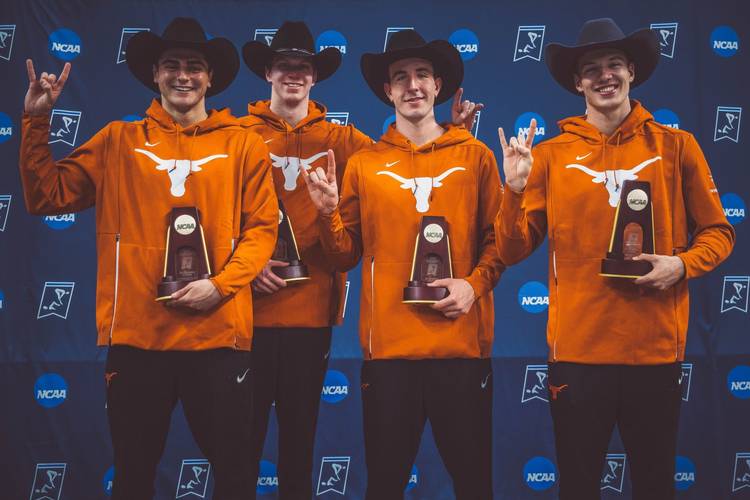 The Texas men's swimming and diving team opened the NCAA Championships with an American record in the 800-yard freestyle relay. [Photo by Texas Athletics]

The Texas men’s swimming and diving team began the NCAA Championships on the right foot, winning the 800-yard freestyle relay and setting an American record Wednesday night at the Jamail Texas Swimming Center.

The team of Townley Haas, Drew Kibler, Austin Katz and Jeff Newkirk clocked a time of 6 minutes, 5.08 seconds for a new NCAA record as well. The mark is also good enough for the U.S. Open record.

Though Haas contributed to a new record, he also saw one of his go down. Dean Farris of Harvard broke Haas’ NCAA, American and U.S. Open records in the 200 freestyle on the leadoff leg of the relay. Farris clocked a time of 1:29.15, topping Haas’ old record of 1:29.50 which was set last year.

Haas wasn’t to be overshadowed, however, closing the race in 1:29.66 and posting the best non-leadoff time ever. Coincidentally, that broke Farris’ record from the Ivy League Championships in February.

With the Longhorns attempting to win five straight NCAA titles, Wednesday’s result is definitely a step in the right direction. The relay was the only event on the first day of the NCAA Championships so Texas is atop the team standings with 40 points. NC State has 34 points with California taking 32.