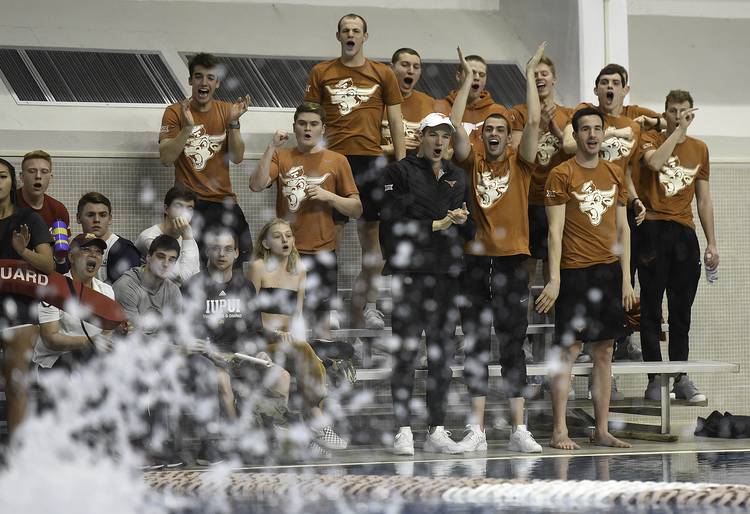 UT sophomore Jordan Windle's teammates react to one of his dives during the 2019 NCAA Division I Men's Swimming and Diving Championships on Saturday March 30, 2019, at the Lee and Joe Jamail Texas Swimming Center at UT. [STEVE LEWIS for STATESMAN]

Both Texas men’s and women’s swimming and diving teams took victories over SMU on Friday in Dallas.

The No. 1 men’s team took a 194-101 win to finish the regular season undefeated. The Longhorns set 11 pool records at the Robson & Lindley Aquatics Center.

Jordan Windle won the men’s 1-meter diving event with a score of 370.35. He also took second in the 3-meter event while Grayson Campbell took the win. Campbell finished with 414.08 points.

Gibson won the women’s 3-meter event with 343.88 points. Paola Pineda broke the old record, too, but finished behind Gibson with 329.03 points.

Texas opened the meet with a win in the 200-medley relay. Chris Staka, Caspar Corbeau, Alvin Jiang and Peter Larson teamed up to set the pool record at 1 minute, 25.11 seconds. On the women’s side, Claire Adams, Evie Pfeifer, Kelly Pash and Bridget Semenuk won with a time of 1:40.91.

Staka, Maxime Rooney, Austin Katz and Daniel Krueger set another pool record in the 200 freestyle relay with a time of 1:18.15.

Up next for both teams is the Big 12 Championships, coming up Feb. 26-29. Competition will take place at West Virginia.