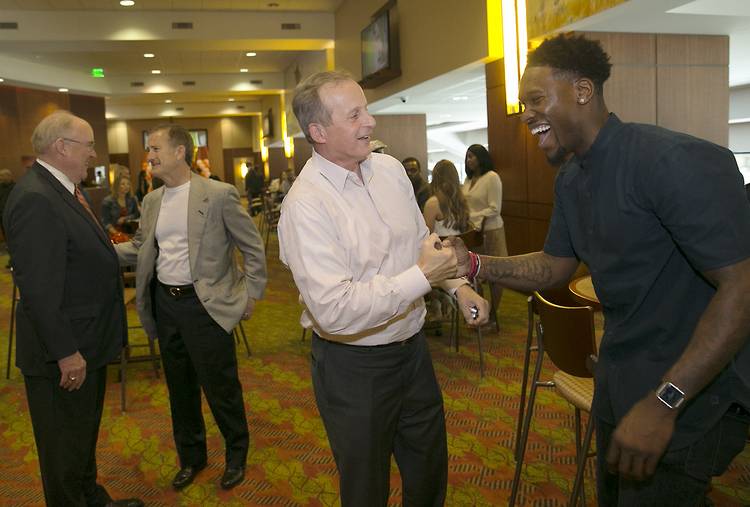 Former Texas basketball coach Rick Barnes has some fun with former player Royal Ivey at a repletion for recent graduates. The University of Texas athletic department held a celebration reception for its 2017 graduates. Some former athletes like basketball star T.J. Ford finally will receive their diplomas after coming back after their professional careers to finish their degree. RALPH BARRERA/AMERICAN-STATESMAN

In this week’s Golden’s Nuggets, Ced touches on a couple of Bevo-related items. Here are his takes:

On former UT athletes earning their college diplomas this week:

Kudos to several Texas exes who earned their college degrees over the weekend. I’ve always believed it’s much more difficult to return to school a decade-plus later after a career and maintain the discipline needed to earn that degree.

It was nice to see former basketball coach Rick Barnes and his All-American point guard T.J. Ford share such an emotional moment after Ford received his bachelor’s degree in youth and community studies. It’s times like these that remind us how sports can transcend the highlight reel.

A career as a pro athlete is a blessing, but there are some youngsters out there who don’t realize that the deck is stacked against them when it comes to making it big in the NBA, NFL, MLB, etc. But armed with a degree, the chance to enjoy a fruitful life goes up immeasurably even without a career in athletics or entertainment.

When you see men like Ford, Cory Redding and Michael Griffin finishing what they started after enjoying successful careers, it sends the right message. The three I mentioned are among quite a few who have come through here and not only made their mark on the field but have also given back to the communities that produced them. That’s the true measure of success in my book.

Who said the Texas Longhorns can’t beat Kentucky and Duke in basketball?

Shaka Smart’s team struggled to an 11-22 finish last season, but he showed us what he can do in the offseason with last week’s humongous signing of Harlem big man Mo Bamba, who also was considering Kentucky.

With Jarrett Allen bound for the NBA, Shaka landed his replacement in impressive fashion. So what if Bamba and Oak Hill Academy point guard point guard Matt Coleman — whom Shaka wrested away from Duke — could both be gone after one season? The Horns have a couple of nice young pieces in place to get this thing back headed the right direction.

Add in guard Andrew Jones, who’s returning to school after working out for NBA scouts over the last few weeks. Good decision. He wasn’t ready for the pros. The kid has star potential and with a true point guard and big man underneath, he should take a huge step forward as a sophomore.

Don’t pencil in the Horns for a Final Four just yet, but there’s enough talent for Shaka to make some good things happen in 2018.

For the rest of Cedric’s Nuggets, including his thoughts on Avery Bradley and the Indy 500 robbery, click here.