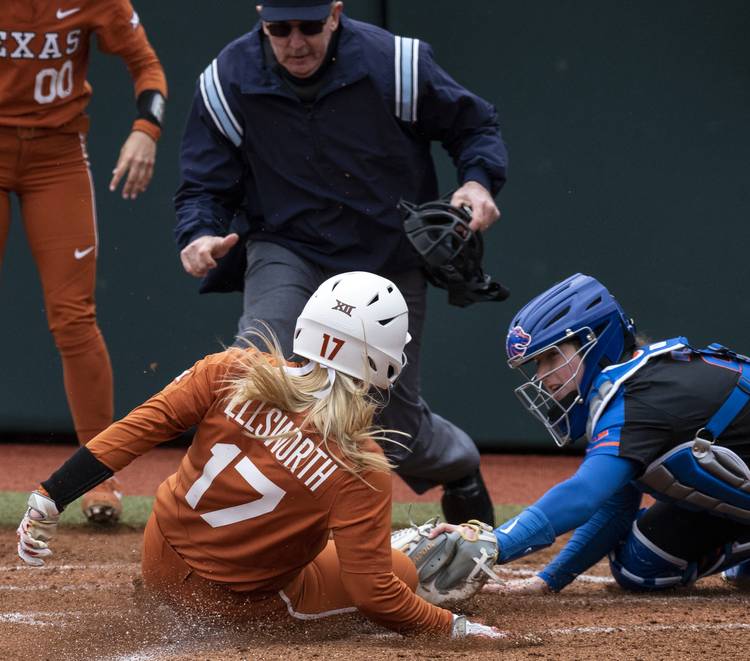 Texas catcher Taylor Ellsworth (17) attempts to score on a wild pitch against Boise State at McCombs Field on Feb. 9, 2019. [Rodolfo Gonzalez for AMERICAN-STATESMAN]

UT junior Taylor Ellsworth is considered “week-to-week” after needing surgery for an injury she sustained in last weekend’s Texas Classic.

In a statement, Texas said that Ellsworth was having a “minor surgery” performed on Thursday. The injury to Ellsworth’s left hand leaves sophomore Mary Iakopo as the only catcher on the Texas roster. (Versatile outfielder MK Tedder, who started 59 times at 3B in 2018, could also catch in an emergency situation.) Iakopo, who announced just before Christmas that she’d transfer to UT from Oregon, is responsible for the team’s only home run so far.

Starting on Thursday afternoon, Texas (4-0) is set to play four games this week at the St. Pete/Clearwater Elite Invitational in Florida.

Ellsworth started in all three games of UT’s triple-header this past weekend. She was used behind the plate in two of those contests. Ellsworth produced three hits and four RBIs in her six at-bats, and her .500 batting average currently leads the Longhorns.

In January of 2017, Ellsworth joined the Longhorns during what should have been the second semester of her senior year at nearby Georgetown High. As a freshman, she quickly earned both a starting role and all-conference honors. Ellsworth hit five homers during her sophomore season.