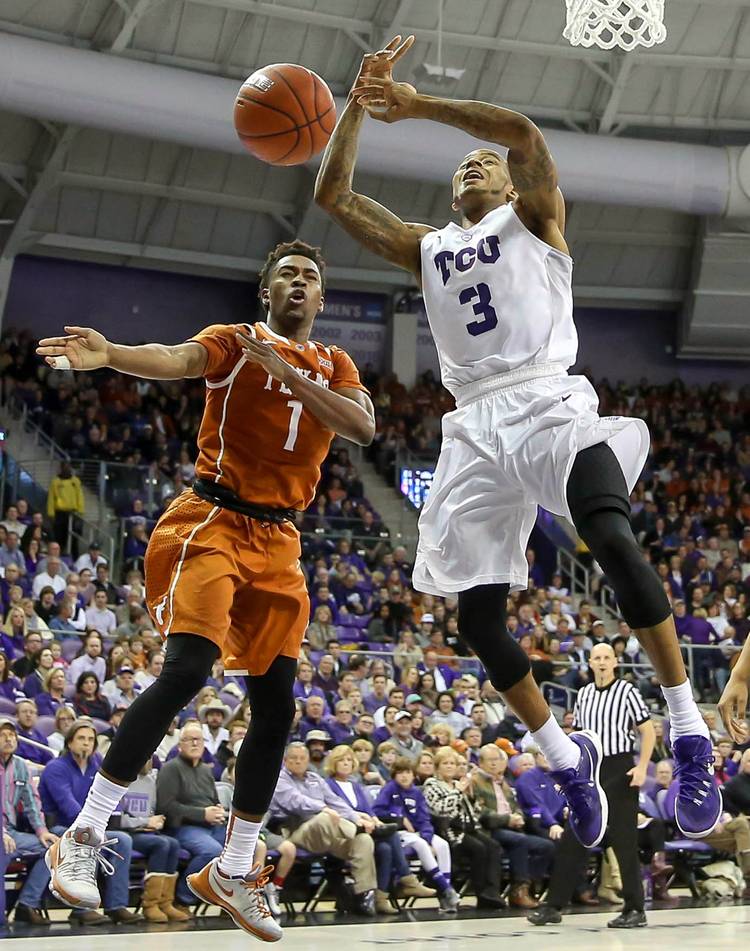 TCU's Malique Trent (3) is fouled by Texas' Isaiah Taylor (1) during the second half on Saturday, Jan. 9, 2016, at Schollmaier Arena. (Steve Nurenberg/Fort Worth Star-Telegram/TNS)

Series history: Texas leads the all-time series, 106-63. The Horned Frogs won the first game earlier this month in Fort Worth, 58-57. Isaiah Taylor missed a jumper in the closing seconds as the Frogs snapped an 11-game series losing streak.

About the Longhorns: Texas saw its three-game winning streak snapped last Saturday at Kansas. Perimeter defensive breakdowns helped the Jayhawks, who hit 6 of 12 3-point shots after halftime and cruised to a 76-67 win. “I think we responded well at times, but we were fighting back and never really got over that hump,” F Connor Lammert said. … Coach Shaka Smart benched G Eric Davis for allowing Wayne Selden to get off multiple 3-point shots in the second half. Davis played only seven minutes in the second half. … Texas has moved into first place in the Big 12 in fewest turnovers allowed (201). The Horns have a plus-2.3 turnover margin, third-best total in the league.

About the Horned Frogs: Coach Trent Johnson refused to get too excited about his team’s win over Texas on Jan. 9. Johnson said it was only one game. “I’m not caught up in what I call false confidence. I’m caught up in consistent behavior,” Johnson said. As it turns out, the Frogs couldn’t keep it going, losing four straight since that night in Fort Worth. … Chauncey Collins has finished in double figures in six of seven Big 12 games. He’s averaging 14 points against four Top 25 opponents. … TCU is a perfect 6-0 when holding its opponents to less than 40 percent shooting. … The Frogs are 41-8 under Johnson when leading at the half.

Longhorns in the NFL: Conference Championships