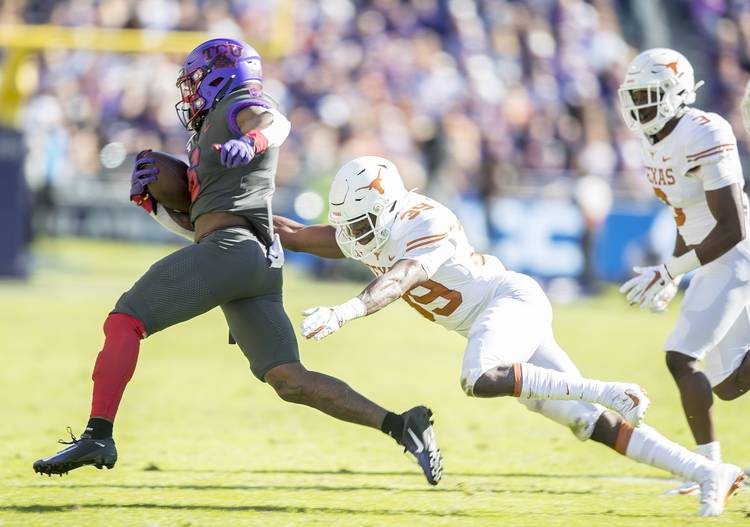 It’s all over at Amon G. Carter Stadium in Fort Worth. The 15th-ranked Longhorns have fallen to TCU, 37-27.

Texas has dropped its last three games at TCU. This week started with the Horned Frogs as slight favorites at home, then it was Texas favored by 1 point toward the end of the week, and the betting line was even come Saturday morning.

Texas committed four turnovers — all Sam Ehlinger interceptions, the last two of which came at the end of the third quarter, killing a UT drive as the Horns trailed 27-20, and on UT’s last-gasp chance in the fourth. The Horns have been so good on third downs and in the red zone this season, but had issues with both on Saturday. Down by 10 in the final quarter, Texas closed to within a field goal but couldn’t make stops on two key third-and-longs on TCU’s next drive. And Texas left 5 points off the scoreboard in the first half — Cameron Dicker’s missed field goal from 26 yards out (the shortest miss of his career) and a missed sack by Malcolm Roach that would have gone for a safety.

Defense. The Horned Frogs picked off Ehlinger four times (and almost five) and really stiffened in the red zone, forcing Texas to uncharacteristically settle for field goals. Max Duggan wasn’t perfect, but made a couple of big plays with his legs and was successful on three deep shots against a struggling UT secondary; all three led to touchdowns.

This was TCU’s first home game in nearly a month, since the 51-14 win over Kansas State on Sept. 28. In the Gary Patterson era, TCU is now 26-25 against ranked teams and 42-16 the week following a regular-season loss. The Frogs have won five of their last six against Texas, and are 6-2 against them as Big 12 teams.

Time for lots of head scratching and soul searching. Oklahoma’s loss in Manhattan leaves the door open for Texas to still make it back to Arlington, but the Horns have some work to do. The off week will come at a welcome time to get healthy in the secondary, and also some time to figure out what’s not working right now.

1. We got Ehlinger on perhaps his worst day as a Longhorn. Four interceptions.

Ehlinger’s picks came in various ways. The first was a bad read — he didn’t see TCU linebacker Garret Wallow on a slant pass to Duvernay; the second was a shot to Jake Smith that was a nice play from the DB; the third was another nice play on a pass to the sideline; and the fourth was a forced pass. For the game, Ehlinger was 22 of 48 for 321 yards, 2 TDs and the 4 picks.

2. Who was thinking Roschon Johnson should be starting, again? Keaontay Ingram, at least this week, looked like we thought he could. He got the start and finished with 71 yards on 16 carries, an average of 4.4 per carry. Johnson had only one carry in the first half and finished with 5 for 9 yards, though he did score a TD. The Horns were more effective running it in the first half, but moved away from the run in the second.

3. TCU’s two main offensive weapons were held in check — mostly. Darius Anderson, who already had 103- and 99-yard games against Texas in his career, had only nine carries for 27 yards. Jalen Reagor had only two catches, but one of them was a 44-yard touchdown, and fumbled a kickoff return.

Texas had allowed five 100-yard rushers in the past four games heading into Saturday. Anderson was held to only 14 yards in the first half and 13 in the second.

4. After famously recording 114 missed tackles through the first seven games, the Horns’ efforts on Saturday looked much better. Brandon Jones, Byron Vaughs and Marqez Bimage all had nice solo stops in important situations. But the pass defense gave up some costly first downs in the third and fourth quarters.

5. TCU’s Max Duggan fell short in his bid to set a school record for consecutive pass attempts without an interception. The freshman had thrown 144 without being picked until Brandon Jones got one in the first quarter. That ended up nine attempts short of the school record (154, set in 2006). Duggan’s streak was the third-longest active one going in the country.

That was Jones’ second pick of the season, which puts him in a tie for the team lead along with D’Shawn Jamison and Joseph Ossai.

7. Horns up: Malcolm Roach had three tackles for loss and a near safety in the first half. He finished with four tackles for loss, a sack and a quarterback hurry. … Ehlinger’s 47-yard touchdown pass to Duvernay was a really nice throw; it led Duvernay just enough to snag it around the 20 and then run it in, all the while running at full speed. … Juwan Mitchell had a big sack late in the third quarter, leading to a TCU punt as the Horns trailed 27-20.

8. Horns down: Ehlinger threw four interceptions. … Junior Angilau was flagged for holding on UT’s first drive, which wiped away an 8-yard gain by Ehlinger. And Parker Braun also was called for holding, and that took away a 13-yard run by Ingram. … Ehlinger either misread where Duvernay was heading, or didn’t see TCU linebacker Garret Wallow, or misthrew it. Either way, it was picked off for his fourth interception of the season, and it happened on Texas’ side of the field. The Frogs ended up kicking a field goal to tie it 3-3. … Keondre Coburn was called for roughing the passer after he drove Duggan into the ground after a third-down incompletion. It gave the Frogs a first down, and they went on to take a 10-3 lead on a touchdown pass. … On that scoring pass, Montrell Estell was beaten in the end zone. … Dicker missed a 26-yard field goal that would have given the Horns a 13-10 lead with 9 minutes left in the half. Hooked it all the way. … Freshman safety Tyler Owens was beaten on a 51-yard shot downfield to Taye Barber. That set up TCU’s tying TD to make it 20-20. And Jamison was burned on a 44-yard touchdown pass to Reagor. … Cade Brewer left the game with an injury in the second quarter. And Ryan Bujcevski exited in the third with what looked like a shoulder injury; he might have injured it on a fake punt run play. Chris Naggar, a junior squadsman from nearby Arlington, handled punts the rest of the day.

9. 20/20 highsight coaching with Tom Herman: Last week, Texas fell short on two fourth-and-2 plays in the 50-48 win over Kansas. This week, Herman faced three fourth-and-1’s — the Horns went for the first one and converted it (though the play was wiped out because officials determined after a late review that UT had gotten the first down on the previous play); then settled for a chip-shot field goal over fourth-and-1 from the 3; and, on the final fourth-and-1, converted the first on a Ryan Bujcevski fake punt.

10. 20/20 hindsight coaching with Gary Patterson: The Frogs’ opening possession ended right at the 50, when Patterson chose to punt it rather than go for it on fourth-and-1. The Horns had a 12-play drive that ended with a field goal. …

Next up for Texas: An off week

The Longhorns get their second bye week of the season. The next game is Nov. 9 against Kansas State, at Royal-Memorial Stadium. Kickoff and TV info hasn’t been announced yet. We could see Caden Sterns, Jalen Green and DeMarvion Overshown back on the field for that one. Maybe Jordan Whittington, too.