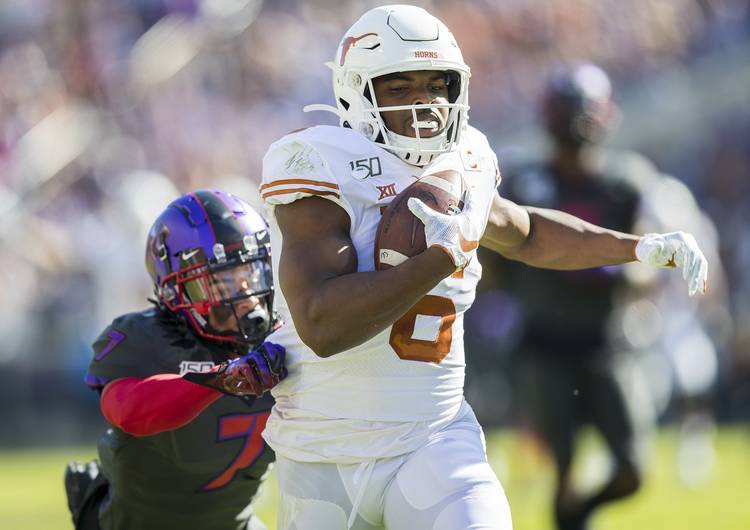 Texas receiver Devin Duvernay (6) runs for a score against TCU at Amon G. Carter Stadium in Fort Worth on Oct. 26, 2019. [RICARDO B. BRAZZIELL/AMERICAN-STATESMAN]

It’s halftime at Amon G. Carter Stadium in Fort Worth. No. 15-ranked Texas, which has dropped its last two games at TCU, is leading the Horned Frogs at halftime, 17-13.

If you paid the money to be there live, or if you’re watching it on TV, you’re seeing some rarely-seen things happen today. Sam Ehlinger has thrown an interception. Max Duggan has thrown an interception. Cameron Dicker has missed a short field goal. The Longhorns have made a big play on a kick return. And the Horned Frogs trotted out a true freshman to kick a 52-yard field goal with no time left on the clock.

1. Ehlinger’s making some plays. He had back-to-back throws that have been two of his best three plays so far, a brilliantly-placed pass to Collin Johnson on the right sideline for 25 yards on third-and-16 that had to be reviewed, and a nice 28-yard gain to Devin Duvernay that was possible because the defense bit on his scramble. And those plays were on UT’s final drive of the half, which ended with a touchdown pass to Keaontay Ingram.

2. Keaontay Ingram started and has been the main guy so far in the running game. He has 11 carries for 60 yards and also caught a late touchdown pass out of the backfield. He’s averaging 5.5 yards a carry. Roschon Johnson has one carry.

3. Collin Johnson is definitely back. He’s the most dangerous weapon for Texas so far, with nine targets. Devin Duvernay has the better stats, however. There’s a reason why Johnson (4-83) ranks No. 8 on UT’s career receptions list and why Duvernay (5-105-1) is No. 10.

4. TCU’s Max Duggan fell short in his bid to set a school record for consecutive pass attempts without an interception. The freshman had thrown 144 without being picked until Brandon Jones got one in the first quarter. That ended up nine attempts short of the school record (154, set in 2006). Duggan’s streak was the third-longest active one going in the country.

6. 20/20 highsight coaching with Tom Herman: The Horns decided to go for it on fourth-and-inches at TCU’s 47 on their opening drive. They got it too, although the play was later wiped out because a review showed Ehlinger had indeed gotten the first down on the play before. Still, that early decision to go for it told us something. … However, six plays later, Herman went the other direction, choosing NOT to go for it on fourth-and-1 at TCU’s 3. Chip-shot field goal for Dicker. … TCU’s Griffin Kell lined up for a 52-yard field goal on the final play of the half, but was woefully short and way to the right. Herman, however, called timeout right before the snap in order to ice the freshman. So, of course, on his second try, Kell nailed it.

7. On one play — a third-and-9 from TCU’s own 3 with 7 minutes left in the halff — Malcolm Roach came thiiis close to a safety, but couldn’t wrap up Duggan in the end zone. Duggan improvised and took off; Joseph Ossai missed him at the 7, and he got the first down. Disappointing on the missed tackle, sure, but replays showed Roach having grasped the bottom of Duggan’s facemask on the sack attempt. It wasn’t called.

8. 20/20 hindsight coaching with Gary Patterson: The Frogs’ opening possession ended right at the 50, when Patterson chose to punt it rather than go for it on fourth-and-1. The Horns had a 12-play drive that ended with a field goal.

9. Horns up: Malcolm Roach already has three tackles for loss. … Brilliant catch by Collin Johnson for 26 yards on a third-and-3, on UT’s first drive. … A Duggan underthrow in the first quarter was picked off by Brandon Jones. That’s his second pick of the season, which puts him in a tie for the team lead along with D’Shawn Jamison and Joseph Ossai. … Ehlinger’s 47-yard touchdown pass to Duvernay was a really nice throw; it led Duvernay just enough to snag it around the 20 and then run it in, all the while running at full speed. … Freshman linebacker Byron Vaughns tripped up Jalen Reagor on a kickoff return early in the second quarter and the ball came loose as he hit the ground; Jett Bush, a non-scholarship linebacker from Houston Strake Jesuit, recovered it at the 25. The play was reviewed for a couple of minutes. … Marqez Bimage made a really nice tackle for no gain on a third-and-2 run, which forced a bad punt that gave the Horns a start at TCU’s 42.

10. Horns down: Junior Angilau was flagged for holding on UT’s first drive, which wiped away an 8-yard gain by Ehlinger. And Parker Braun also was called for holding, and that took away a 13-yard run by Ingram. … Ehlinger either misread where Devin Duvernay was heading, or didn’t see TCU linebacker Garret Wallow, or misthrew it. Either way, it was his fourth interception of the season, and it happened on Texas’ side of the field. The Frogs ended up kicking field goal to tie it 3-3. … Keondre Coburn was called for roughing the passer after he drove Duggan into the ground after a third-down incompletion. It gave the Frogs a first down, and they went on to take a 10-3 lead on a touchdown pass. … On that scoring pass, Montrell Estell was beaten in the end zone. … Dicker missed a 26-yard field goal that would have given the Horns a 13-10 lead with 9 minutes left in the half. Hooked it all the way.