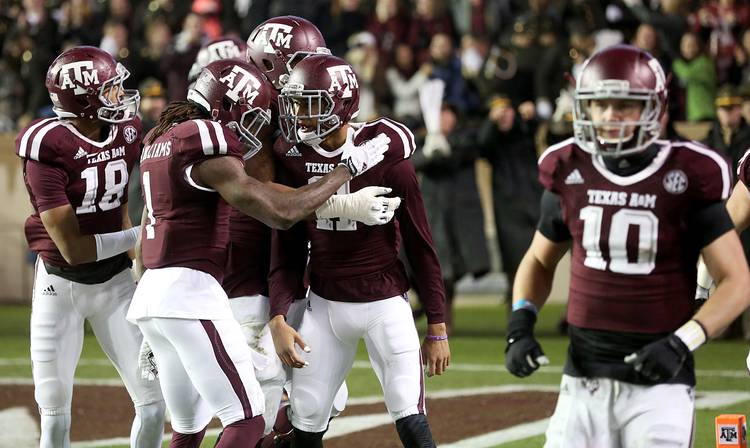 Josh Reynolds (11) of the Texas A&M Aggies celebrates his touchdown reception with teammates against the Missouri Tigers in the first half in a NCAA football game on November 15, 2014, at Kyle Field in College Station, Texas. (Photo by Thomas B. Shea/Getty Images)

“We have to really assess what is our best path to winning the (Southeastern Conference) West,” Woodward said, according to The Daily Trib. “I don’t foresee anything happening in the near future. There are a lot of opinions well above my pay grade. Rivalries, I think, are healthy for the game.

“It’ll be something we’ll consider,” he added. “It’ll be a discussion I’ll have to have. I have no objection to it. It’s something that has to work for us and for folks.”

Woodward may be new to the job, but he’s spot on in that any decision about getting the Longhorns and Aggies back together will be made “above my pay grade.”

It’s unlikely Woodward and his UT counterpart, Texas’ Mike Perrin, could schedule any game on their own. Both schools would need to get administrative blessings at multiple levels due to the highly-political nature of the matchup.

But the simple fact the Aggies are thawing on the topic is at least a move in the right direction — for those who want to see the rivalry renewed, anyway.

Texas and A&M haven’t played since the 2011 football season, the Aggies’ last in the Big 12 before leaving for the SEC. The Longhorns hold the all-time series edge, 76-37-5.