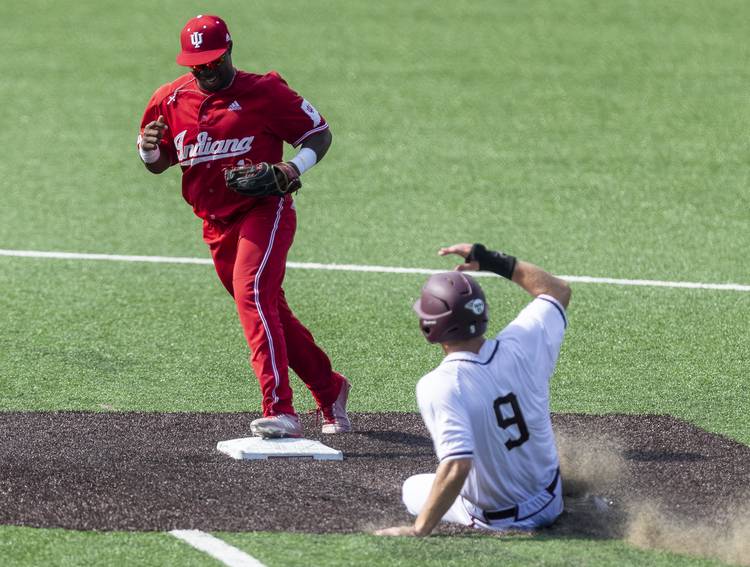 Indiana shortstop Jeremy Houston (1) gets the out on Texas A&M's Zach DeLoach during an NCAA regional game at UFCU Disch-Falk Field on June 3, 2018. (Stephen Spillman / for American-Statesman)

The weather forecast on Sunday called for an 80-degree day in Bloomington, Ind.

Over 1,000 miles away, the Indiana Hoosiers planned for a long day of fun in the sun.

Indiana’s offense exploded in the first inning of a 9-7 win over Texas A&M at UFCU Disch-Falk Field. The result eliminated the Aggies from an Austin-based regional in the NCAA tournament. The Hoosiers (40-18) advanced to play Texas in a game that was set to start at 8 p.m. on Sunday.

During the game — which lasted 3:28 — the temperature reader on a stadium scoreboard exceeded 100 degrees.

“It is hot, but man, it’s the championship of a regional,” said Indiana coach Chris Lemonis. “We’ve trained for it all year long, so I think those guys will be ready. We’re probably a little fatigued or whatever, but you’ve just got to fight through it.”

Indiana was only two days removed from a 10-3 loss to the Aggies, but it didn’t take long for the Hoosiers to get their revenge. In the top of the first inning, Indiana scored all nine of their runs.

The Hoosiers sent 14 batters to the plate in the first inning. Matt Lloyd and Luke Miller both collected two hits in the inning, and leadoff hitter Logan Kaletha scored twice after drawing walks in his two appearances at the plate. Lloyd and Scotty Bradley each homered as Indiana’s one-inning outburst exceeded the total production from 45 of their 57 games.

Texas A&M starter Kaylor Chafin faced only seven Hoosiers, and he exited with a 6-0 deficit and one out on the scoreboard. The left-hander was making only his fourth start of the season. (He had a 3.19 ERA over 26 appearances). Chafin had last pitched during Texas A&M’s opener at the SEC tournament on May 22.

Down early, Texas A&M slowly chipped away at Indiana’s lead. The Aggies doubled nine times and outhit Indiana 17-14, and the deficit was narrowed to two runs with one out in the ninth inning. With two teammates aboard, Allonte Wingate then grounded into the Aggies’ fourth double play of the afternoon.

Lloyd, who started the game at first base, pitched the final four outs for the Hoosiers.

“When you’re down 9-0, you’ve got to be perfect,” Texas A&M coach Rob Childress said. “We as were close to perfect as you could be. We weren’t perfect, we were awful close and that’s why we didn’t win the game today.”

One day after losing an 8-3 game to UT, Texas A&M finished its season with a 40-22 record. Childress said he opted to start Chafin because he was an experienced redshirt senior. No seniors, however, appeared in the batting order. Childress conceded a MLB Draft that begins on Monday could impact his roster, but freshman outfielder Zach DeLoach was optimistic about the program’s future.

“We feel really confident,” DeLoach said. “We got a lot of freshman experience. I think Coach Childress believed in us this year, just to give us an opportunity. Giving us this opportunity will get us more prepared for next year.”