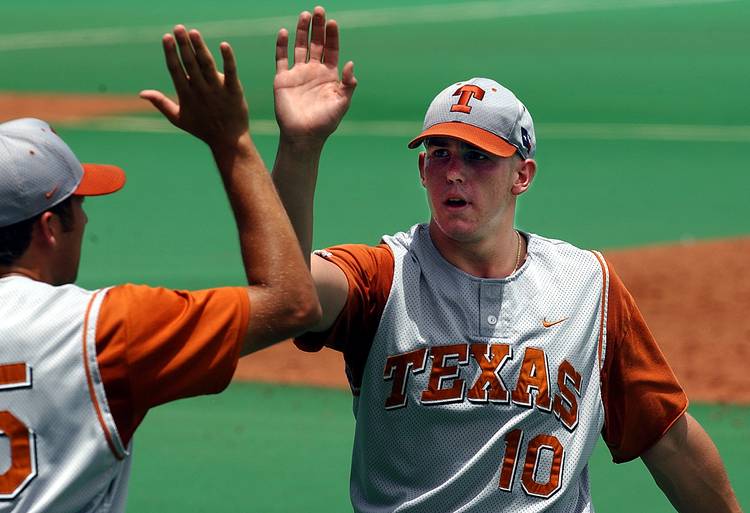 UT pitcher Sam LeCure is congratulated by teammates as he returns to the dugout in the fourth inning of the Super Regionals final with Vanderbilt at Disch-Falk Field in June 2004. (Photo by Larry Kolvoord/American-Statesman)

Last week, former Longhorn pitcher Sam LeCure’s tenure with the Cincinnati Reds came to an end when the 31-year-old reliever agreed to join the Diamondbacks.

LeCure had spent his entire career with the Reds and in 2013 had a career-best 2.66 ERA in 63 appearances.

In…11 years, I gained many great friends and some great fans as well. I gave you everything I had every time I was out there. Thank you

With 28 days left until pitchers like LeCure report to spring training, it’s a good time to break down which former Longhorns are expected to make opening day major league rosters this year or have been invited to major league camps.

Here’s a complete list of former Texas players who have been drafted, including many who are still in the minors and have yet to make their MLB debuts.

(Years at Texas in parenthesis)

First baseman Brandon Belt (2008-09) is coming off his best season as a professional and started in 137 games for the Giants in 2015. He batted .280 and will enter spring training as the starting first baseman for the Giants.

Outfielder Jordan Danks (2006-08) recently signed a minor league contract with the Texas Rangers and will compete for a roster spot with the loaded Rangers. Danks broke into the MLB in 2012 with the Phillies, posting a .224/.300/.322 slash line. With the Rangers full to the brim with outfielders, Danks may be slated for Triple-A Round Rock, which is where he played his high school ball.

Starting pitcher Taylor Jungmann (2009-11) is currently slated for the Milwaukee Brewer’s rotation this season. The former Longhorn standout, who was taken 12th overall in 2011, posted a 9-8 record with the Brewers with a 3.77 ERA in 119.1 innings. He struck out 107 batters.

Left-handed pitcher Andrew McKirahan (2009-11) made his major league debut with the Atlanta Braves last season, pitching in 27.1 innings and striking out 22 batters. He also served an 80-game suspension for PEDs. He is projected to make the Braves’ opening-day roster as a reliever.

Closer Huston Street (2002-04) has enjoyed the best career of any active former Longhorn in the MLB.  Street saved 40 games for the Los Angeles Angels last season and finished with a 3.18 ERA. Now 32, Street has 315 career saves since making his debut in 2005 and has a career 2.85 ERA.

Outfielder Drew Stubbs (2004-06) was the only former Longhorn who played postseason baseball in 2015, where he played with the Rangers. But a month away before spring training starts, Stubbs is a free agent looking for a team.  Since breaking into the majors with the Cincinnati Reds, Stubbs has played for the Cleveland Indians, Colorado Rockies and Rangers. He was 1-for-4 in the postseason for the Rangers.

Relief pitcher Brandon Workman (2008-10) is recovering from Tommy John surgery and is expected to return to the Boston Red Sox at some point this season. He allowed one run in 8 2/3 innings of postseason baseball in 2013.