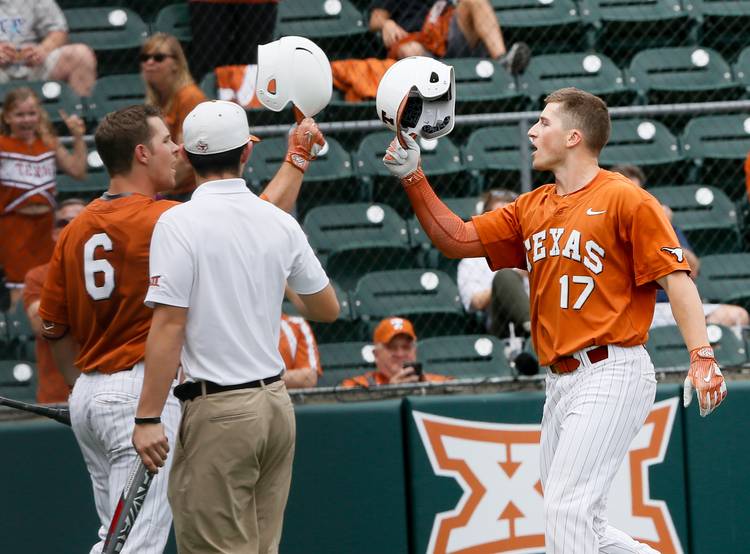 Bret Boswell (17) celebrates home run with Tyler Rand (6) in the final game in a series against the Rice University Owls at the University of Texas' UFCU Disch-Falk Field in Austin, Texas on February 19, 2017 (Andy Nietupski for AMERICAN STATESMAN)

After splitting the first two games, Texas closed out a three-game series against UConn with a 9-3 win on Sunday.

Texas (5-3) grabbed a three-run lead in the opening inning at UFCU Disch-Falk Field. The first home run of freshman Ryan Reynolds’ collegiate career was a two-run job, and Bret Boswell singled home Kacy Clemens. UConn (4-3) pulled within a run over the next two innings, but Clemens drove in a run during the third inning before later scoring on a passed ball.

Texas went onto score four more times. Those nine runs were the most scored by the Longhorns in Austin since a 12-2 win over Kansas on April 16, 2016.

Picking up the win on the mound was junior Jake McKenzie, who relieved starter Blair Henley with an out in the third inning. A year after he pitched only 1 1/3 innings, McKenzie allowed one hit and no walks over 4 2/3 innings. Listed as both a right-handed pitcher and infielder on Texas’ roster, McKenzie also successfully fielded four balls during his second appearance of the season.

Texas will next host Lamar on Tuesday.

Ahead of Stanford showdown, Texas ranked 21st in national poll