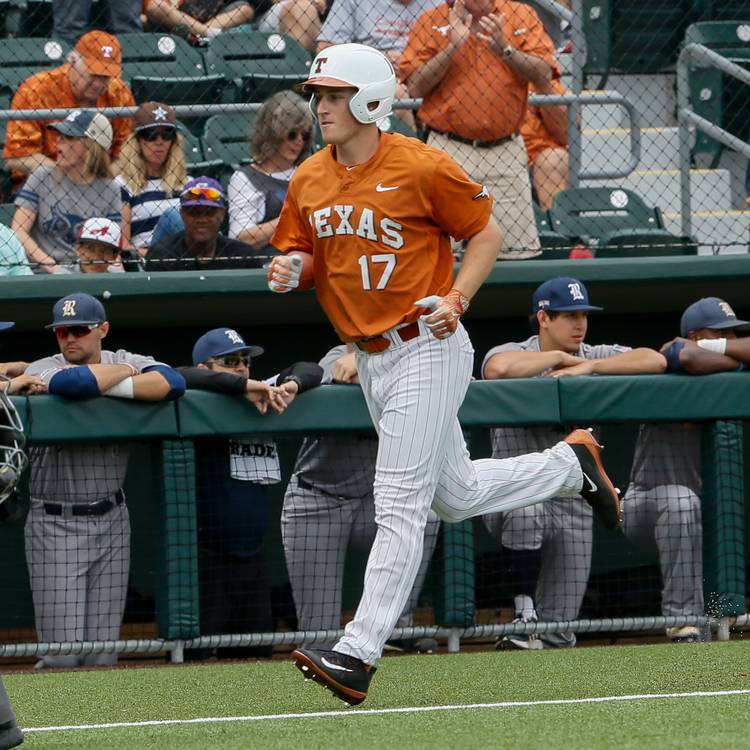 Bret Boswell (17) rounds the bases on his solo home run in the final game in a series against the Rice University Owls at the University of Texas' UFCU Disch-Falk Field in Austin, Texas on February 19, 2017 (Andy Nietupski for AMERICAN STATESMAN)

The Texas Longhorns baseball team had 13 hits on their way to a 9-0 win over the Richmond Spiders (3-8) at UFCU Disch-Falk Field on Tuesday night.

Austin Todd was 2 for 3 with two runs scored, two doubles and three runs batted in to lead the Texas offense.

David Hamilton and Bret Boswell each had two RBIs as four Longhorns had multi-hit games. Travis Jones and Ryan Reynolds each contributed an RBI.

Connor Mayes (1-1) picked up his first win of the season, allowing no runs on just one hit through five innings. He had five strikeouts and walked three.

“He commanded his fastball much better and so he could pitch off of it,” head coach David Pierce said. “It didn’t hurt having a cushion and being able to go out and relax and pitch, but that’s how he needs to pitch all the time, even in a 0-0 game.”

Boswell hit a two-out RBI single in the bottom of the first to kick things off for the Longhorns and they never looked back.

Reynolds followed with an RBI single to make it 2-0 through the first inning.

McCann led off the second inning with a double before the Longhorns loaded the bases. A fielder’s choice and an error led to Texas adding two more runs. Todd hit a two-run double to put the Longhorns up 6-0 before Boswell struck with another RBI.

McCann’s triple led off the third inning and he scored on a ground out by Travis Jones to make it 8-0. McCann finished the game 2 for 5 with two runs scored, a double and a triple.

Todd’s second double of the night gave the Longhorns their final run of the game as Tyler Rand scored in the seventh inning.

Freshman Trace Brucey had his first hit as a Longhorn, doubling in the fifth inning.

“He can really hit and it’s time to give him an opportunity,” Pierce said of the freshman out of Corpus Christi Carroll. “He stepped in and he looked very comfortable and had great results.”

Highlights via the Longhorn Network: