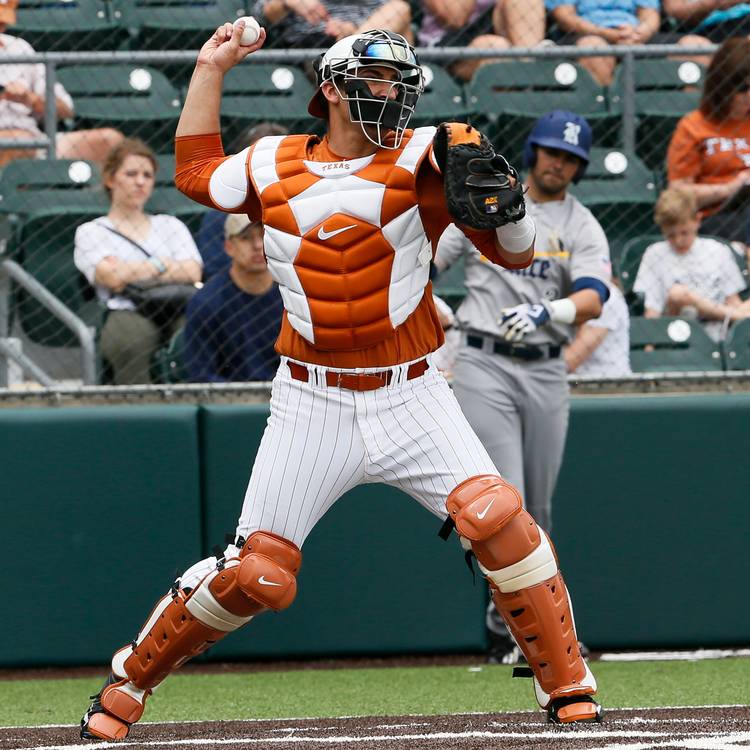 Michael Cantu (7) throws to second base in the final game in a series against the Rice University Owls at the University of Texas' UFCU Disch-Falk Field in Austin, Texas on February 19, 2017 (Andy Nietupski for AMERICAN STATESMAN)

A five-run third inning and five strong innings from Kyle Johnston propelled the Texas Longhorns baseball team to an 8-1 win over the Sam Houston State Bearkats at UFCU Disch-Falk Field on Tuesday night.

Johnston (2-1) picked up the win as he allowed one run on just one hit through five innings of work. He struck out four and walked two.

“It was a great night for Kyle Johnston, to come out and give us five solid innings,” said head coach David Pierce. “His stuff was really good early.”

Chase Shugart came on in relief and held the Bearkats down for two innings, allowing no runs and two hits. He struck out two of the eight batters he faced.

Connor Mayes and Tyler Schimpf each pitched an inning and didn’t allow a hit.

Reynolds got things started for Texas in the third with a one-out double. After he made it to third base on a ground out, Trace Bucey singled to get the Longhorns on the scoreboard.

Tate Shaw hit a double to put runners on the corners before Kacy Clemens hit a two-run single to right field to make it 3-0.

Bret Boswell singled with two outs to score Travis Jones and Cantu picked up his first RBI of the night in the next at-bat to make it 5-0.

After Cantu hit his solo home run in the sixth, Texas tacked on two more runs in the eighth. Boswell scored on an RBI single by Austin Todd before Cantu scored on a hit by Reynolds to cap the scoring for Texas.

The Longhorns will host No. 16 Oklahoma for a three-game Big 12 series beginning Friday at 7 p.m.

“OU has a great pitching staff. They have a great team. We’re just going to have to have the same approach against quality pitchers,” Pierce said.

Texas practice report: Toughness is Priority No. 1 one at Camp Herman