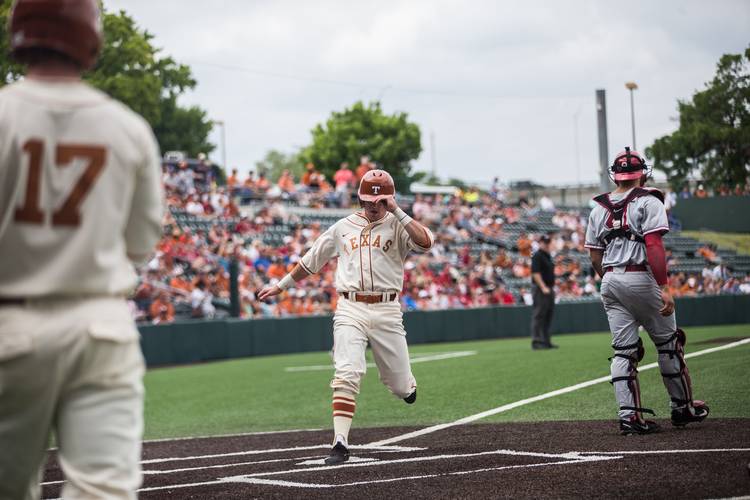 Texas starter Nolan Kingham had a rough outing in Waco as the Longhorns baseball team opened a Big 12 series with a 6-2 loss to Baylor on Thursday night.

A two-out, four-run second inning by the Bears proved to be the difference in the contest.

Kingham (5-3) allowed six earned runs on nine hits through five innings. He struck out five and gave up two walks.

T.J. Raguse was 3 for 4 with a run scored and a run batted in while his Baylor teammate Shea Langeliers was 1 for 4 with a home run and two RBIs.

Tucker Cascadden also had two RBIs for the Bears. He went 1 for 3 from the plate and scored a run.

Nick Lewis (4-3) picked up the win, allowing one unearned run on four hits through six innings. He struck out four and walked three.

A two-run double by Cascadden with two outs in the bottom of the second put the Bears (21-13, 4-6 Big 12) in the lead. They got two more runs in the inning on a passed ball and an RBI single by Raguse to make it 4-0 after two innings.

Texas (23-14, 6-7) got on the scoreboard when Kody Clemens doubled with Patrick Mathis on base to make it 4-1 in the top of the fifth. Clemens also drove in a run on a ground out in the ninth to give the Longhorns their second run of the night. Mathis scored on that play as well.

A two-run home run by Langeliers made it 6-1 in the bottom half of the fifth to pad the Bears’ lead.

The Longhorns opened the ninth inning with a single by Mathis and a double by David Hamilton, but the attempt at a rally produced just one run. After Clemens plated Mathis, Tate Shaw struck out and Travis Jones flied out to end the game.

Texas faces Baylor for the second game of the series at 6:35 p.m. in Waco on Friday.