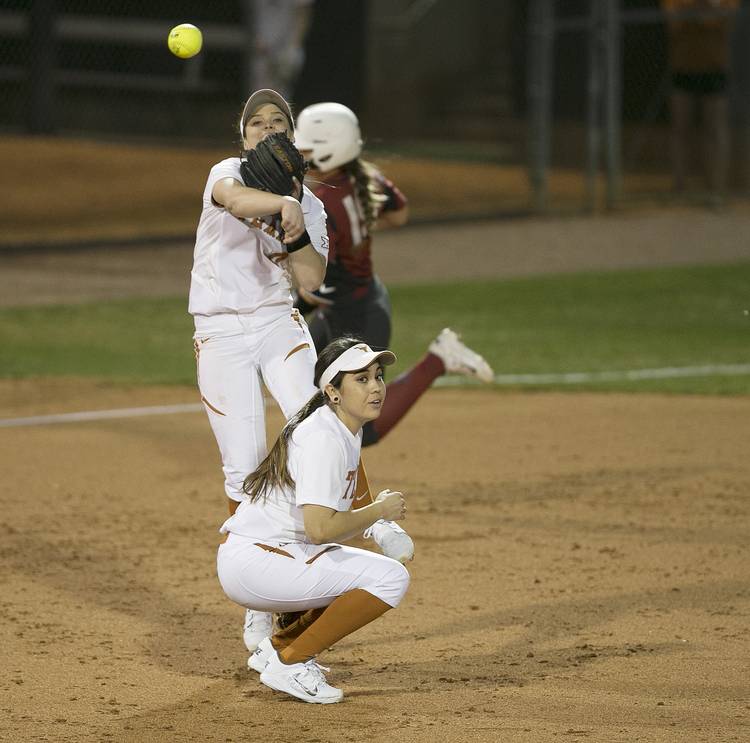 For Texas, a recent pair of 6-3 putouts were anything but routine.

Over the Easter weekend, Texas picked up a couple of web gems from its starting shortstops. Senior Devon Tunning showed off her glove in the softball team’s 9-5 win at Texas Tech on Friday. One day later, freshman David Hamilton provided his highlight as the baseball team knocked off Baylor in Waco.

Leading off the bottom of Friday’s sixth inning, Texas Tech senior Brittany Warnecke grounded a ball that forced Tunning to scoot to her left. After fielding the ball, Tunning gunned down Warnecke at first base from her knees.

Hamilton made his play in the eighth inning of Texas’ 5-3 extra-inning win over Baylor.  Matt Menard grounded a baseball to the right of Hamilton, who made a diving stop before throwing a ball that first baseman Kacy Clemens scooped for the out. Menard was Baylor’s clean-up hitter, but he ranks second among the Bears with his two steals.

Hamilton has posted a .974 fielding percentage this season, and the San Marcos native has 133 defensive assists against only five errors. Hamilton has also been involved with most of Texas’ 39 double plays, which rank second among the NCAA’s 295 Division I teams.

Tunning, meanwhile, has earned a .922 fielding percentage (60 assists and 11 errors). Since her arrival from Montgomery High ahead of the 2014 season, Tunning has started in all but four of Texas’ 208 games.