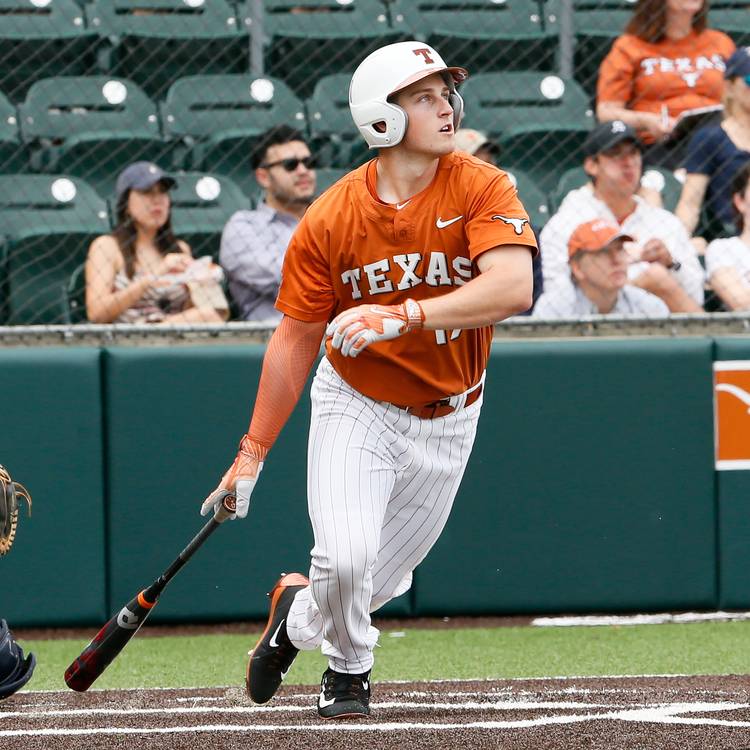 Bret Boswell (17) hits a solo home run in the final game in a series against the Rice University Owls at the University of Texas' UFCU Disch-Falk Field in Austin, Texas on February 19, 2017 (Andy Nietupski for AMERICAN STATESMAN)

Morgan Cooper struck out 11 batters and Bret Boswell homered twice as the Longhorns baseball team shut out Oklahoma State 7-0 to complete a sweep of Friday’s doubleheader in Stillwater, Okla.

Cooper (6-2) allowed just two hits and walked one batter through seven strong innings to earn his sixth win of the year.

Boswell and Patrick Mathis each homered to power the Texas offense to its largest margin of victory since defeating Texas State 9-2 on Apr. 11.

Jake McKenzie and Chase Shugart combined to allow just one hit in relief as the Longhorns gave up just three hits overall to the Cowboys (23-18, 6-11).

Tyler Buffett (5-4) was hit with the loss despite striking out 10 Longhorns. He gave up six runs on nine hits through seven innings.

In the first game of the doubleheader, the Longhorns scored three runs in the eighth and Nolan Kingham pitched seven solid innings to earn a 5-4 win.

Beau Ridgeway picked up his 10th save of the season as he held the Cowboys to two runs in two innings.

Zane Gurwitz homered and Boswell had two RBIs in the win. Kacy Clemens and Michael McCann each added an RBI.

Oklahoma State took a 2-0 lead on a home run by Cade Cabbiness in the second inning.

Gurwitz answered with a solo shot in the third inning.

With the game tied at 2-2 the Longhorns plated three runs to take the lead in the eighth. Clemens, Boswell and McCann each drove in runs in the inning.

Ridgeway gave up a two-run single in the bottom of the ninth but struck out two batters to hold on to the win.