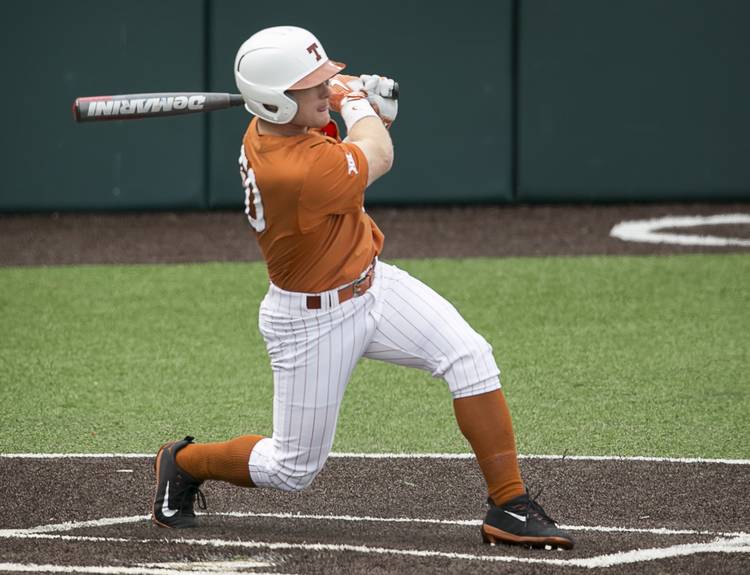 The Texas Longhorns baseball team scored six straight runs late in the game but eventually fell 11-10 to TCU in 11 innings in Fort Worth on Friday night.

Connor Wanhanen hit a sacrifice fly off Beau Ridgeway (1-2) in the bottom of the 11th to score Evan Williams, ending the game.

Zane Gurwitz and Austin Todd each went 5 for 6 from the plate and drove in three runs. Gurwitz’s RBI single in the top of the 10th put the Longhorns (31-17, 9-9) in position to win, but it wasn’t to be. Todd homered in the third.

A four-run seventh inning allowed the Longhorns to come within a run of TCU and Texas tied the game at 9-all in the ninth to force extra innings.

Gurwitz opened the ninth with a single and moved to second on a passed ball. After a sac bunt by Michael McCann moved Gurwitz to third, Tyler Rand’s sacrifice fly tied the game.

Texas starter Morgan Cooper was hit hard as he allowed seven runs on eight hits in just three innings of work. He faced 21 batters while walking three and striking out three. He gave up a home run and four doubles.

Nick Lodolo started for TCU and allowed four runs on seven hits through four innings. Cal Coughlin (1-0) earned the win as he pitched one scoreless inning, striking out the side in the 11th.

Trailing 9-5 in to start the seventh, the Longhorns plated four runs to get back in the game. Gurwitz hit an RBI single to drive home Travis Jones. McCann followed that up with another RBI single which scored Kacy Clemens. Todd capped the inning with a single up the middle that drove in Gurwitz.

Jones was 2 for 4 with a run scored. Ryan Reynolds, McCann each had an RBI.

The teams will play the second game of the series at noon in Fort Worth.

Longhorns in the NBA Playoffs: Second round