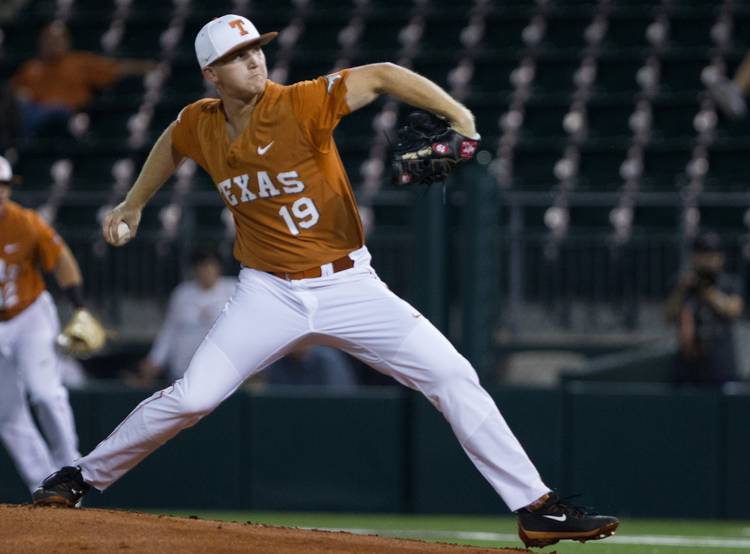 Connor Mayes was the starting pitcher during the 9-5 win by UT over Lamar University on February 28, 2017 at UFCU Disch-Falk Field. PAUL BRICK FOR ACN.

The dominoes have started to fall at Texas.

Eleven Longhorns and four Texas signees were taken in this week’s MLB Draft. A dozen of those draftees have collegiate eligibility remaining, so they have until July 15 to decide whether to start their professional careers or play at Texas in 2018. Not all of those decisions will be made at the deadline, though, as some plans have already been reported or announced.

Here is a running list of the MLB-bound Longhorns:

Thank you to the LA Dodgers Organization. So excited for this opportunity and can't wait to get started. #hookemforever

Off to follow your dreams, @kylejohnston834 "If you can?” said Jesus. “Everything is possible for one who believes.” Dreams come true. pic.twitter.com/XDyFl1QyHP

Yesterday was an unforgettable experience. Thank you to the Colorado Rockies for giving me the opportunity to continue to chase my dream!🤘🏻

#HookEm signee Blake Pflughaupt, LHP from Galveston College, tells me he's agreed to terms with the #Rays (27th round selection).

High fives for @_Jones_Travis_ signing with the @Royals. Chrome til the end. 🤘🏻 pic.twitter.com/XRnRnKUyUY