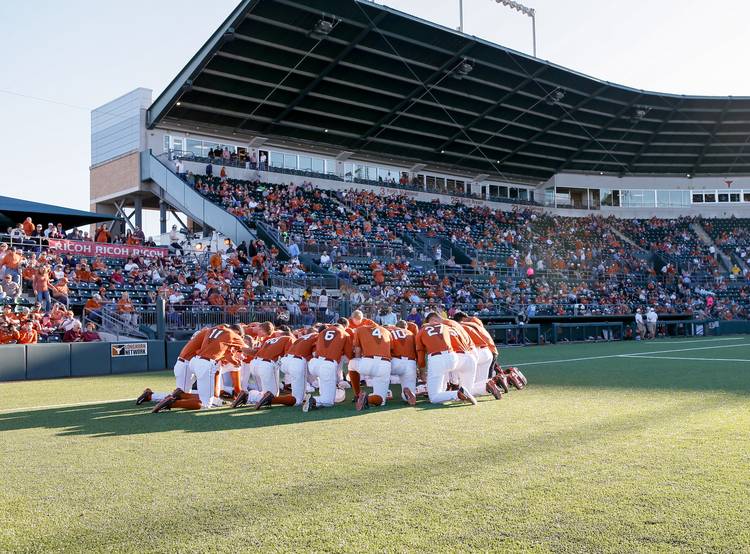 UT players say a prayer prior to a game against Texas A&M at UFCU Disch-Falk Field on March 14, 2017 (Andy Nietupski for AMERICAN STATESMAN)

Texas fans will hear a familiar voice on their baseball broadcasts this spring.

The Longhorn IMG Radio Network announced this week that Quan Cosby has been added to the team that broadcasts Texas’ baseball games. Cosby currently serves as the sideline reporter for the network’s airing of UT football games. This spring, he’ll join the established team of Craig Way (play-by-play) and Roger Wallace (analyst and back-up play-by-play). Keith Moreland, Tom Barfield and Dave Garrett will also contribute to the broadcasts throughout the 2018 season.

“I know Longhorn fans know how much I love baseball,” Cosby said in a story posted on texassports.com. “I talk about it all the time and get to as many games as I possibly can. I have my day job, which is going well, so being a part of the radio team will be something I do because of my love for the game. I’ve really enjoyed working the sidelines at football games for the past few years with Craig and Roger so getting in the booth for some baseball games this year is a great opportunity.”

Cosby was a receiver at Texas from 2005-08. Long before his game-winning catch against Ohio State in the 2009 Fiesta Bowl, Cosby spent four years an outfielder in the Anaheim Angels’ farm system. The Angels used a sixth-round pick in 2001 on Cosby, who was a product of Mart High.

Texas opens its 2018 season against UL-Lafayette on Feb. 16. The program’s annual alumni game is set for Feb. 3.

22 days until the start of the @TexasBaseball season.