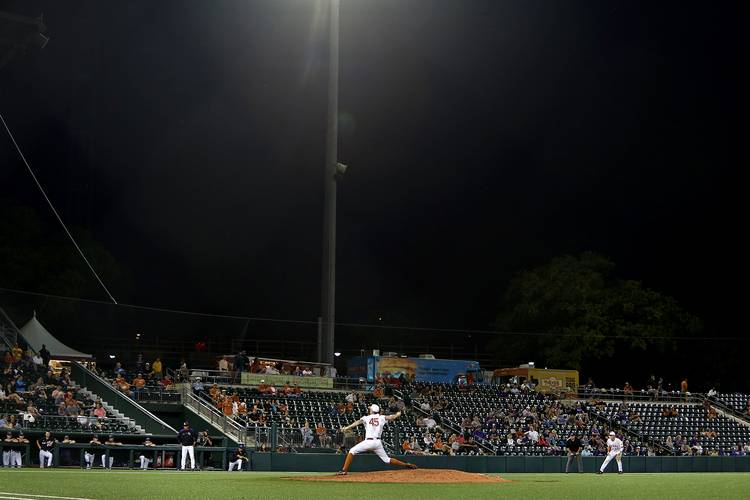 Nolan Kingham throws a pitch against Kansas State at UFCU Dish-Falk Field on March 24, 2017. Texas averaged nearly 5,000 fans at home this season but this weekend's NCAA Austin Regional has sold out. (Daulton Venglar/AMERICAN-STATESMAN)

Led by All-American candidate Nolan Kingham, Texas opened its 2018 season on Friday with a 3-0 win over Louisiana-Lafayette.

A junior right-hander, Kingham allowed three hits and one walk over an 89-pitch, eight-inning outing at UFCU Disch-Falk Field. Named a preseason All-American by three different publications, Kingham retired 12 straight batters at one point. His 10 strikeouts were a career-high total.

Onto the 9th. Horns lead it, 3-0, and that'll be all for @nolankingham who was… really, really good tonight. pic.twitter.com/G5iRWK4xQy

UT stranded three runners over the first two innings, but Austin Todd drove in the team’s first run of the season with a third-inning groundout. Masen Hibbeler then scored during the fifth and seven innings. Hibbeler, a second baseman who spent the last two years at Odessa College, contributed three singles, two stolen bases and two runs in his Texas debut.

Texas (1-0) and Louisiana-Lafayette (0-1) will resume their three-game series on Saturday. The first pitch is set for 2:30 p.m.