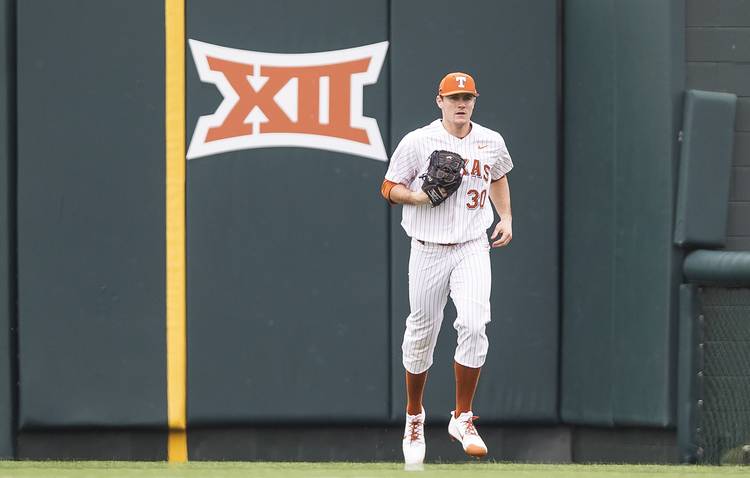 Texas pitcher Josh Sawyer (30) runs to the mound from the bullpen during a NCAA college baseball game against Louisiana-Lafayette in Austin, Texas, on Sunday, Feb. 18, 2018. NICK WAGNER / AMERICAN-STATESMAN

The No. 23 LSU Tigers opened up a five-run lead after the first inning and didn’t look back as they defeated the No. 19 Texas Longhorns baseball team 13-4 in Baton Rouge, La. on Friday night.

The Tigers (3-2) had 16 hits and drove Texas starter Nolan Kingham (1-1) from the mound in the fourth inning.

Zack Hess picked up the win as he allowed two runs on five hits through six innings. He struck out 10 and walked just two. Kingham took the loss after allowing eight runs, four unearned, on eight hits through three innings.

Brandt Broussard went 4-for-5 with two runs scored, a double and four RBIs. Daniel Cabrera went 2-for-5 with a double and three RBIs. Beau Jordan scored three runs as did Bryce Jordan. Austin Bain doubled twice, scored a run and had an RBI for the Tigers.

Beau Jordan reached base on a fielder’s choice and advanced on a throwing error by Kingham. Hunter Feduccia and Duplantis scored on the play. A double by  Broussard drove home Bryce Jordan and Beau Jordan to make it 5-0 after just one inning.

Texas (3-2) was able to respond with two runs in the next inning, however. Tate Shaw tripled to score DJ Petrinsky before a sacrifice fly by Ryan Reynolds plated Shaw to pull Texas to within three runs. Petrinsky finished the game 2-for-5 with two runs scored. Shaw was 2-for-3 with a run scored and two RBIs.

An RBI single by Hal Hughes and a two-run double by Cabrera in the third inning negated the UT progress and drove Kingham from the mound.

The Tigers added two runs in the fourth before putting up three more in the sixth.

Texas scored two runs in the eighth inning but it wasn’t nearly enough.

Kody Clemens went 2-for-3 with a run scored.

Parker Joe Robinson was another of few highlights for the Longhorns baseball team on the mound. He didn’t allow a run in 2 1/3 innings while striking out four in relief.

Texas will try to even the series on Saturday night at 6:30 p.m.