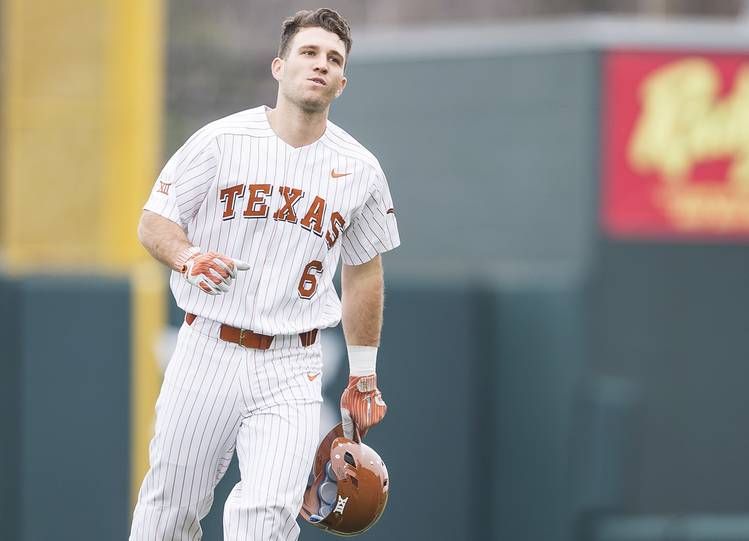 Texas catcher DJ Petrinsky (6) reacts after he left a runner on base during a NCAA college baseball game against Louisiana-Lafayette in Austin, Texas, on Sunday, Feb. 18, 2018. NICK WAGNER / AMERICAN-STATESMAN

Texas closer Beau Ridgeway got his first start of the season Tuesday night after struggling out of the bullpen to start the season. The result wasn’t what the Longhorns baseball team wanted, however, as they fell to No. 5 Arkansas 13-4 in Fayetteville.

It was the first time Texas traveled to Fayetteville since 1991. They last met in 2012 when the Razorbacks won 7-3 at the Houston College Classic.

A seven-run third inning chased Ridgeway (1-1) from the mound as the Razorbacks cruised to victory.

Kacey Murphy (2-0) picked up the win, allowing two runs on five hits in six innings of work. Jacob Kostyshock earned the save despite giving up two runs. He gave up four hits and walked two in three innings.

Ridgeway gave up five runs on four hits in just 2 1/3 innings. He struck out two, walked three and gave up a double in his 55 pitches.

Eric Cole went 3-for-5 with two doubles, a run scored and three RBIs for the Razorbacks. Jordan McFarland went 2-for-4 with a double and four RBIs. Grant Koch and Carson Shaddy each had two hits for Arkansas.

Casey Martin hit a home run and drove in three runs as the Razorbacks improved to 12-4 on the season.

Despite Arkansas winning by nearly double digits, Texas (9-8) showed some power at the plate. DJ Petrinsky hit two home runs, the first of his career, on the night as he drove in three runs. Zach Zubia also hit a home run, his fourth of the season.

The runs came too few and far between to keep up with Arkansas, however. After the Longhorns cut the lead to 7-2 in the fifth, the Razorbacks added four more in the bottom of the inning. The teams traded a pair of runs in the seventh to account for the final score.

The teams play again tomorrow at 4 p.m. to conclude the two-game set. Nico O’Donnell will take the mound for Texas.