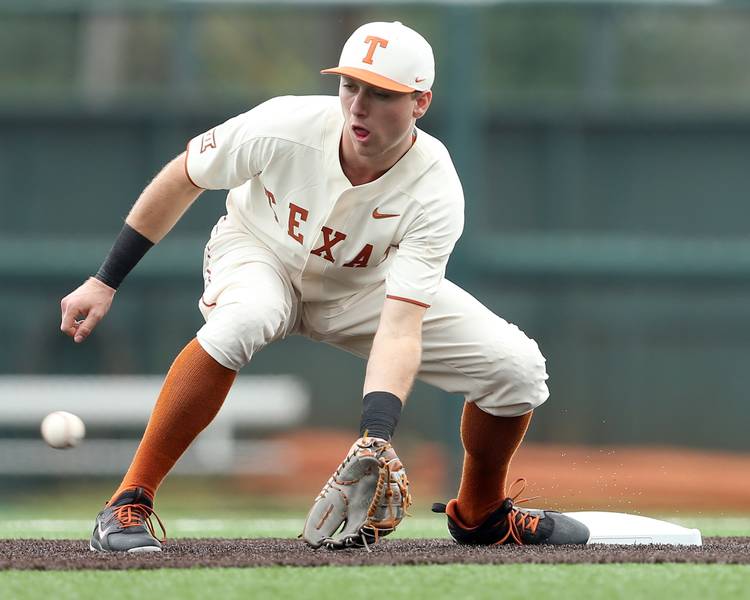 The Texas Longhorns baseball team rallied but eventually fell 7-5 to the No. 5 Arkansas Razorbacks in Fayetteville on Wednesday. The Razorbacks swept the two-game series.

Texas (9-9) took an early 2-0 lead, but five consecutive runs by Arkansas (13-4), including a four-run fourth inning, put the home team back in the driver’s seat.

Casey Martin went 2-for-3 with three runs scored, a home run and two RBIs for Arkansas. Evan Lee also had two hits in three at bats to score a run and drive in two more.

Kody Clemens went 1-for-4 with a double and an RBI. Zach Zubia also doubled, drove in a run and scored another.

With the Longhorns trailing 5-2 in the fifth, Clemens hit a double that scored Masen Hibbeler to make it 5-3.

Texas added two more runs in the eighth to pull within a run. Zubia’s leadoff double started the rally for Texas. Ryan Reynolds singled to score Zubia later in the inning. After Austin Todd got aboard with an infield hit, Duke Ellis singled to score Todd. That made it 6-5.

The Razorbacks added valuable insurance in the bottom of the inning, however.

Caleb Bolden (2-0) earned the win in three innings on the mound in relief. He allowed no runs on one hit and struck out three. Matt Cronin made his second save of the season. He got Clemens to foul out before striking out Zubia and inducing a ground out from Todd to end the game.

Nico O’Donnell (1-1) took the loss for Texas, allowing five runs on six hits in three innings. He struck out three and walked two. O’Donnell gave up one run through the first three innings but failed to get an out in the fourth and was responsible for four more runs that crossed the plate.