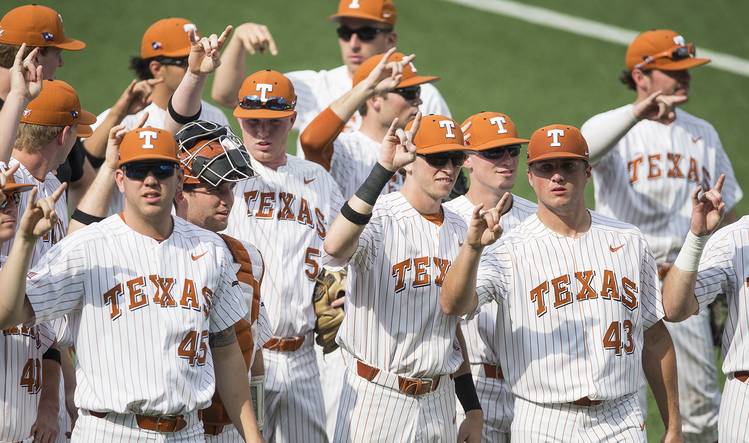 Texas players stand for the Eyes of Texas after defeating Kansas in a NCAA college baseball game in Austin, Texas, on Sunday, March 18, 2018. NICK WAGNER / AMERICAN-STATESMAN

For the second time in the series the Longhorns baseball team posted a seven-run inning against the Kansas State Wildcats. This time they made it count, defeating Kansas State 9-5 in Manhattan, Kan., in the series finale on Saturday.

Andy McGuire had three RBIs, including a two-run double to get things going in the seven-run fifth inning. He was also hit by a pitch in the third inning with the bases loaded to give Texas a 2-1 lead.

Tate Shaw and Masen Hibbeler each went 2-for-5 with a run scored and an RBI. Kody Clemens, Ryan Reynolds and Jake McKenzie also drove in runs. Joe Baker, who pinch hit in the fifth, tied the game by driving home Zach Zubia on a single to left field.

After Texas took a 2-1 lead, the Wildcats scored four runs in the third inning. Run-scoring singles by Cameron Thompson and Trent McMaster pushed the score to 5-2.

Following Baker’s game-tying single in the fifth, McKenzie and Shaw each drew bases-loaded walks to give Texas a two-run lead.

Hibbeler singled to make it a three-run game before Clemens capped the Texas scoring with a fielder’s choice that drove in McKenzie.

McGuire stepped on the mound in the eighth and earned his second save of the year after a perfect ninth.

The Longhorns baseball team is back in action on Monday when it hosts McNeese State.