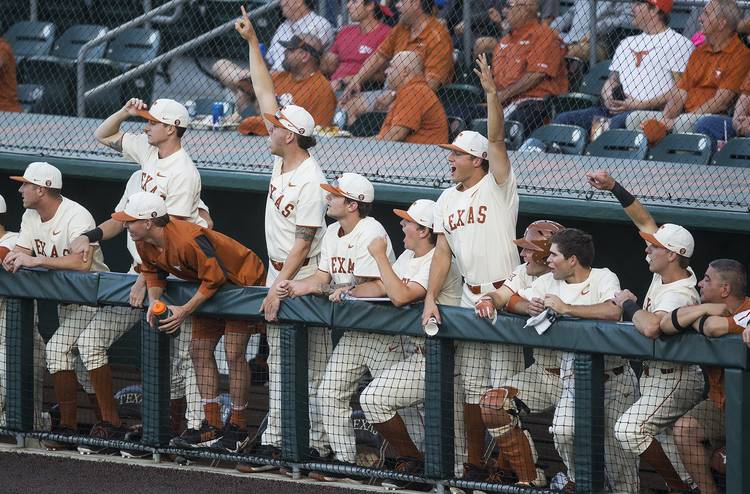 The Texas Longhorns baseball team scored in four straight innings to help it secure a 10-2 win over Texas Southern in Sugar Land on Wednesday.

Texas played the home half of the innings as the teams met at Constellation Field, the home of the minor league Sugar Land Skeeters.

Andy McGuire hit a home run and Duke Ellis scored three runs to help lift Texas to the win. McGuire finished 1-for-4 with two runs scored and two RBIs. Ellis went 2-for-3 and drove in a run.

Michael McCann went 3-for-3 and hit a double. Tate Shaw, Kody Clemens and David Hamilton each had an RBI. Ryan Reynolds doubled and scored a run.

Nico O’Donnell was credited with the win. He pitched two innings, giving up no runs on four hits while striking out two.

Mason Furlong was tagged with the loss, giving up five runs on six hits in four innings.

The Longhorns got on the scoreboard in the first inning when Furlong committed a throwing error that allowed Tate Shaw to score from third.

Ellis hit a triple to follow up a double by Reynolds to make it 2-0 in the fourth inning. Ellis scored later in the inning on a wild pitch.

After a sacrifice fly by Hamilton made it 4-0 in the fifth, McGuire hit his second home run of the season to push the lead to 6-0. Clemens scored on the play as well.

Texas Southern got two runs back in the top of the sixth. Jose Cabreja hit an RBI single to make it 6-1 before another RBI single by Kamren Dukes cut the lead to four.

Redshirt junior George Pappas got his first hit as a Longhorn when he pinch hit for McCann in the seventh inning.

Also in the seventh, McGuire walked, stole second and moved to third on the hit by Pappas. He scored on a wild pitch to make it 9-2.

Clemens walked with the bases loaded three batters later to cap the scoring.

The Longhorns baseball team has four more non-conference games before taking West Virginia on April 27. Up next, Texas has four straight home games, beginning with a three-game series with New Orleans that starts on Friday at 7 p.m.

Texas’ volleyball program secures a pledge from a local libero

Breakfast with Bevo: Putting the ‘student’ in ‘student-athlete’ at Texas