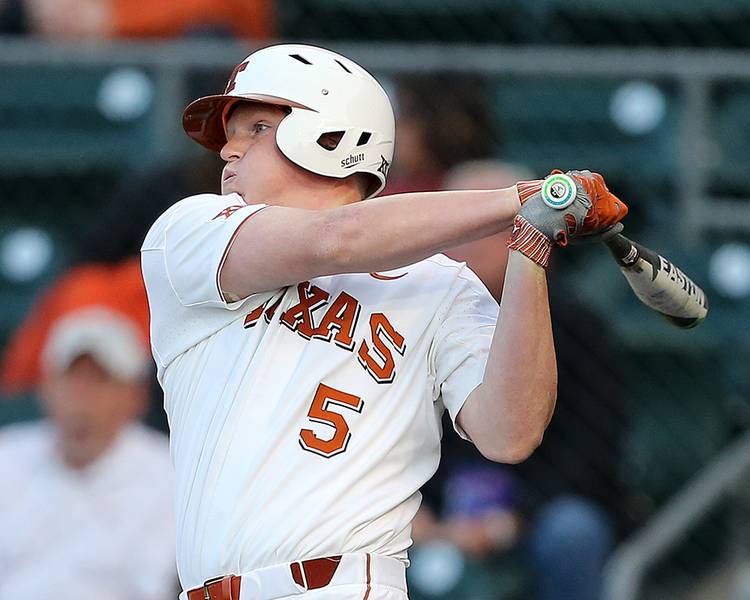 A six-run seventh inning propelled the Texas Longhorns baseball team to an 11-6 win over the West Virginia Mountaineers in Morgantown, W.V. on Friday.

Ryan Reynolds went 4-for-5 with a run scored, two doubles and four RBIs to power the Texas offense. David Hamilton went 3-for-5, scored three runs, hit a triple and drove in two runs. D.J. Petrinsky also had two RBIs as he went 2-for-5 with a run scored. Masen Hibbeler hit a home run and finished the game 2-for-4 with two runs scored, a double and an RBI.

The Longhorns scored eight runs over the final three innings while holding the Mountaineers scoreless.

Matt Whelan picked up the win with a stellar, four-inning performance in which he gave up no hits and struck out seven in relief.

Texas fell behind 2-0 through three innings before they responded. The Longhorns scored two runs to tie the game in the fourth. Hamilton tripled to score Zach Zubia and then headed home on a single by Reynolds.

Over the next two innings, West Virginia added four runs to regain control of the game, however. A two-run single by Ivan Gonzalez made it 5-2 in favor of the Mountaineers in the bottom of the fifth.

Duke Ellis hit an RBI single for Texas in the top of the sixth, but Darius Hill added another run for West Virginia in the bottom of the inning to make the lead three runs.

Hamilton hit an RBI single to get the Longhorns going in the seventh. Reynolds followed that up with a two-run double before Petrinsky added two more runs on a single. Tate Shaw capped the six-run inning with a sacrifice fly to drive home Petrinsky.

Texas added two more runs over the next two innings, including a home run by Hibbeler.

The Longhorns baseball squad faces West Virginia for the second game of the series Saturday at 3 p.m.