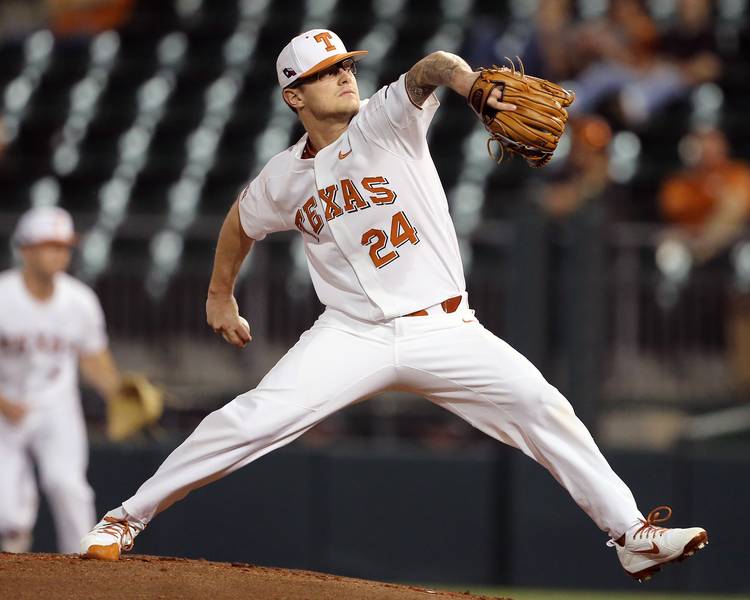 Texas pitcher Chase Shugart started on the mound against Northwestern at UFCU Disch-Falk Field on March 2, 2018. JAMIE HARMS / FOR AMERICAN-STATESMAN

The Texas Tech Red Raiders scored at least two runs in each of their final five innings in a 16-5 win over the Texas baseball team to tie the series in Lubbock on Saturday.

The Longhorns didn’t help themselves as they issued ten walks on the day. Six of those walks went on to score runs. Twice the Longhorns hit batters who went on to score as well. The loss sets up a big game Sunday as the teams battle for positioning in the Big 12 standings.

Chase Shugart retired the first five batters he faced, but a solo home run by Michael Davis got things started for the Red Raiders in the second.

Shugart fell to 4-3 as he allowed eight runs on six hits through 4 2/3 innings. He surrendered five walks, five extra-base hits and struck out just one.

For the Longhorns, Masen Hibbeler and Tate Shaw each doubled and scored a run. Andy McGuire went 1-for-2 with a run scored, a double and an RBI. David Hamilton also doubled and drove in a run.

Caleb Kilian earned the win for Texas Tech as he surrendered four runs on six hits through 6 1/3 innings.

The Texas baseball team will try to take the series and increase their lead over Tech on Sunday at 2 p.m.