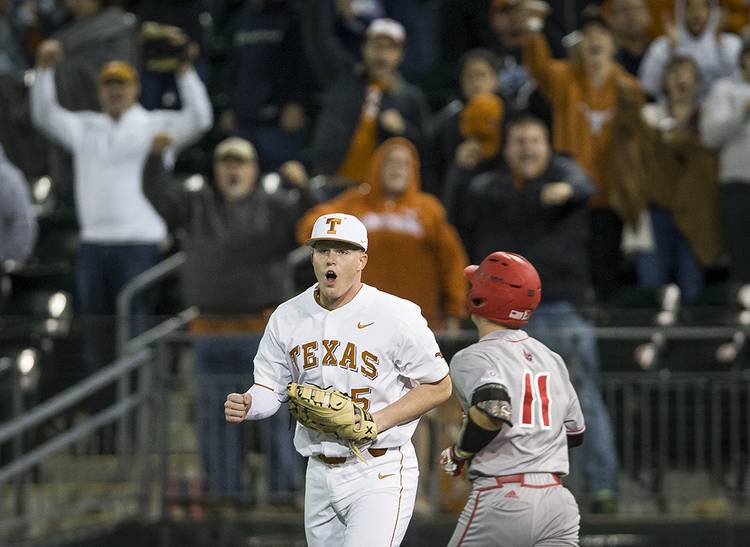 Texas infielder Ryan Reynolds (5) celebrates the final out of a game against Louisiana-Lafayette at UFCU Disch-Falk Field on Feb. 16, 2018. NICK WAGNER / AMERICAN-STATESMAN

The Texas baseball team opened the season with a win Friday night in extra innings and followed it up with an afternoon victory Saturday at Louisiana-Lafayette to win the series.

It took 10 innings to decide the first game of the season for the Longhorns, but they came away with a 3-1 win. Texas edged out the Ragin’ Cajuns once again Saturday with a 6-5 victory.

A home run by Ryan Reynolds in the seventh inning proved to be the difference Saturday.

Nico O’Donnell closed out the win for Texas, giving up one run and striking out four in 2 1/3 innings.

After a productive second inning for both teams, the game remained 5-4 in favor of Texas through six frames.

The Longhorns’ 1-2-3 hitters each had a double in the contest. Duke Ellis went 2 for 4 with a run scored, a double and two walks from the leadoff spot. Hitting second, Eric Kennedy scored a run, doubled and had an RBI. Hitting third, Austin Todd had two hits and an RBI double.

Cole Quintanilla got credit for the win, allowing no runs on two hits in 2 2/3 innings. He came on in relief of starter Blair Henley who allowed four runs on five hits through two innings.

Daniel Lahare went 2 for 5 with run scored, a double and two RBIs to lead the Ragin’ Cajuns. Handsome Monica also had two hits and a run scored in the contest.

The teams close out the series Sunday at 1 p.m. in Lafayette.