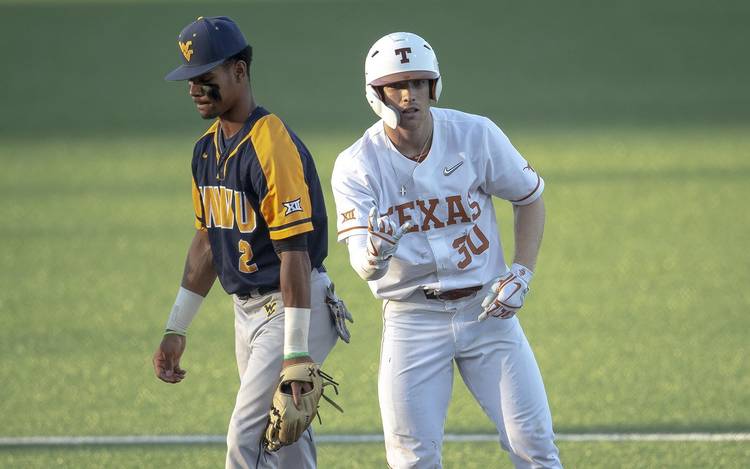 Ford hit a two-run homer in the second inning to give Texas a 2-1 lead, but that was only the start of a big day for the freshman infielder. Ford led off a three-run fourth inning with a double. The Kerrville-raised second baseman later hit a grand slam in the sixth session.

Ford wasn’t the only freshman that No. 17 West Virginia (26-15; 10-8 Big 12) couldn’t figure out. In what was his longest outing in conference play, Madden allowed six hits and over six innings. Three of his 91 pitches struck out Mountaineers.

The losers of three one-run games this week, Texas (25-21; 6-11) corrected a six-game skid with the win. UT entered Sunday a half-game behind eighth-place Kansas in the Big 12’s nine-team standings. Kansas, which routed Furman in a non-conference game on Sunday, will host Texas next weekend.

Hey @DSeifertD1PBR, add Ty Madden to the #heatsheet. He followed this up with 95, then 87 MPH + slider. #Hookem pic.twitter.com/nCDJ4KLDRk

NOTABLE NUMBER: 7. Ford had been UT’s only regular starter without a home run this season. Ford and fellow freshmen Eric Kennedy, Bryce Reagan and Caston Peter have now combined for seven homers. Zach Zubia, who redshirted in 2017, accounted for all 11 of the freshman class’ homers in 2018. David Pierce’s first year in Austin featured six home runs from Texas freshmen.

UP NEXT: On Tuesday evening, Texas will travel to Corpus Christi to play Texas A&M-Corpus Christi. The game will be played at Whataburger Field, which is the home of Houston Astros’ Double-A affiliate. UT was beaten earlier this season by Incarnate Word at the Milwaukee Brewers’ Triple-A stadium in San Antonio. If Texas reaches the Big 12 tournament, that will be held at the Los Angeles Dodgers’ Triple-A facility in Oklahoma City.