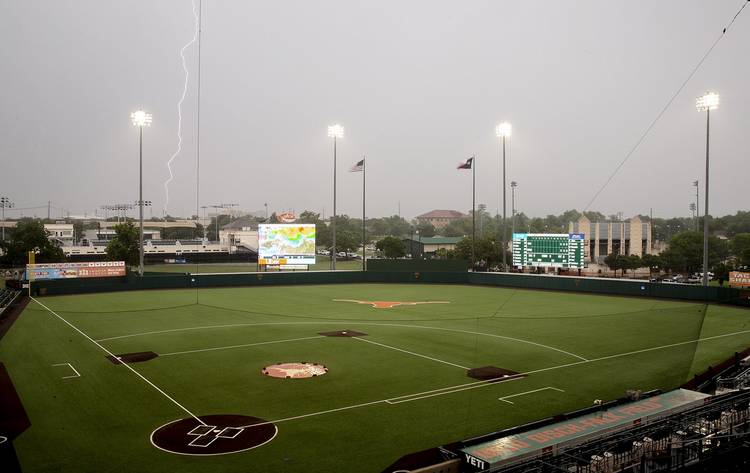 Lightning strikes near UFCU Disch-Falk Field on May 7, 2019. [NICK WAGNER/AMERICAN-STATESMAN]

Thanks to a series of thunderstorms, a midweek meeting between Texas and Texas State’s baseball teams was cancelled on Tuesday night.

Before the cancellation was announced at UFCU Disch-Falk Field, the two teams sat through a delay that lasted roughly two hours. Tuesday’s game will not be made up. That leaves Texas State’s 7-6 win on April 23 as the only official result between these two schools in 2019.

Tonight’s Texas St vs Texas baseball game has been cancelled and will not be made up.

Texas (25-25) is off for the rest of this week. Starting next Tuesday, the Longhorns will close out the regular season with four home games in five days against Incarnate Word and Oklahoma.

Texas State (33-15) is set to return to action on Friday when it travels to Arkansas-Little Rock.

With its conference tournament on deck, the Big 12 honors five Longhorns