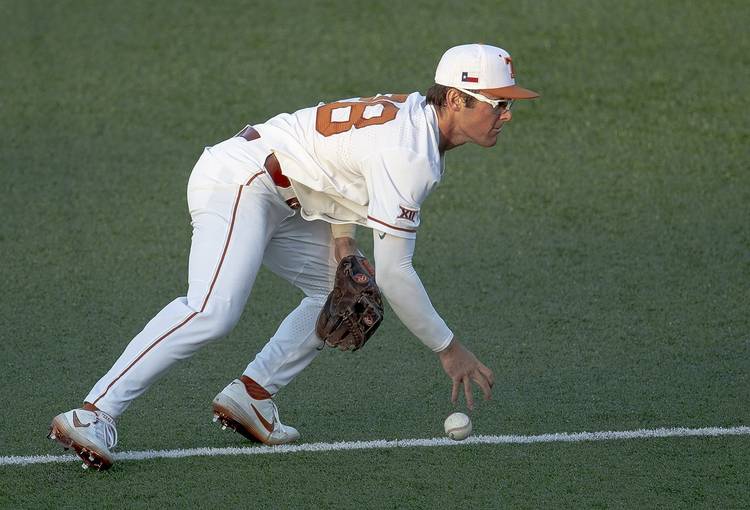 Texas infielder Lance Ford (28) commits an error against Oklahoma on May 16, 2019 in Austin. [NICK WAGNER/AMERICAN-STATESMAN]

A two-run loss to the rivals Sooners on Thursday pushed Texas’ baseball season closer to a disappointing end.

In order to secure a trip to the Big 12 tournament, Texas (26-26; 6-15) must now beat Oklahoma twice and have Kansas sweep Kansas State in a three-game series that begins on Friday. In other words, UT’s season will essentially be over after its next loss or Kansas State’s next win.

Texas trailed early at UFCU Disch-Falk Field as a first-inning error and a second-inning balk helped Oklahoma build a 2-0 lead. UT’s deficit doubled in the sixth session as Oklahoma made Bryce Elder pay for two walks.

Austin Todd and Zach Zubia drove in runs for UT during the sixth inning’s bottom half.  Texas was unable to pull any closer to Oklahoma despite getting a Longhorn on base in each of the final three innings. Ryan Reynolds led off the final frame with a single, but Jason Ruffcorn picked up his conference-leading 11th save by forcing a double play and a game-ending groundout.

Elder, who wears No. 13 for Texas, made his 13th start of the season. Over a six-inning outing, he surrendered four hits while striking out six batters. Three of the four Sooners walked by Elder scored. His two balks were also factors in OU scores.

If Thursday was Elder’s last appearance of the season, he will have worked 83 innings in 2019. Last season, Elder threw 35 2/3 innings over 21 relief appearances and one start. After posting a 5.55 ERA as a freshman, Elder has a 2.93 ERA this year.

In only two of UT’s last four season as the team’s top starter posted a sub-3.00 ERA.

UP NEXT: Since rain is in the forecast for Saturday, Texas and Oklahoma have moved their series finale to Friday. The Longhorns and Sooners will still play at 6:30 p.m. on Friday. The two teams will also play at 1 p.m. Baseball fans with a lot of stamina can also cross Comal Street between the two games to watch Texas’ softball team play Sam Houston State in an NCAA regional at 4 p.m.