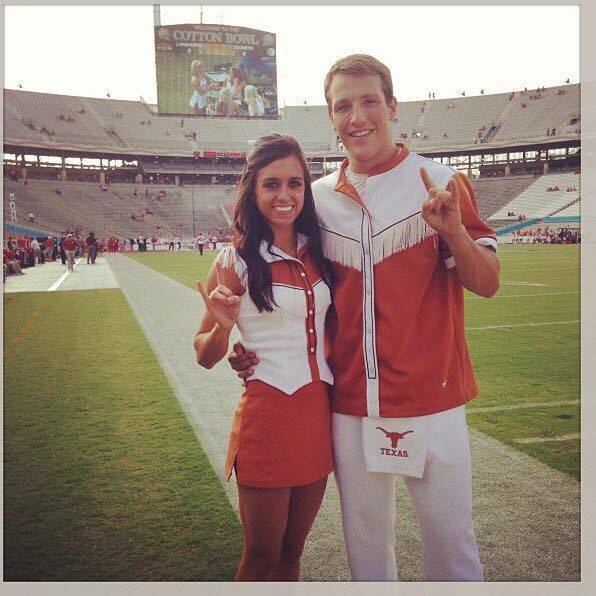 Natalie and David Grun cheered during their time at the University of Texas and recently had other Texas Cheer and Pom members perform with them at their wedding. (Photo contributed by Natalie Grun)

Ever wonder what happens when two former Texas cheerleaders get hitched and fill their wedding party with other squad members?

Lots of cheers, dancing, and stunts of course.

Natalie and David Grun, high school sweethearts who’ve been together almost seven years, married April 8. The wedding party was definitely not short on spirit: Three bridesmaids and four groomsmen cheered at UT. Another bridesmaid danced on the Texas Pom squad.

Three more guests not in the wedding party also cheered with the couple. It was inevitable some of the classic songs from athletic events would have them taking over the dance floor with a baker’s dozen of Texas’ most energetic fans. The group performed to Longhorn Band recordings of “Texas Fight” and “Wabash Cannonball.”

“We decided to do Wabash because it was always a part of our pep rallies and one of the most fun dances we did during our time as cheerleaders,” Natalie said. “We always did Wabash at the end of every third quarter.”

The group capped off their show with “The Eyes of Texas.” The newlyweds got in the action as the groom lifted the bride onto his shoulders.

The performance was a hit with the wedding guests.

“I think they loved it! According to our parents, everyone had a good time, especially the Longhorn fans,” Natalie said.

The Longhorn couple are known to break into cheer stunts, such as on vacation. Now that they’re married, they won’t rule out a lift if the time is right.

“It’s been a lot less lately in the past year or two, but we do stunt maybe once or twice a year on occasion,” Natalie said. “Most of the time, it’s been spontaneous if we feel like it, so we will see.”

Who needs to raise their glasses to a happy couple, when you can raise your horns?

Watch the action below.

WATCH: Hookem.com’s Mike Craven breaks down the recruiting effect of the Orange-White game

WATCH: Finally, a full breakdown of everything in Texas’ $10,500 locker