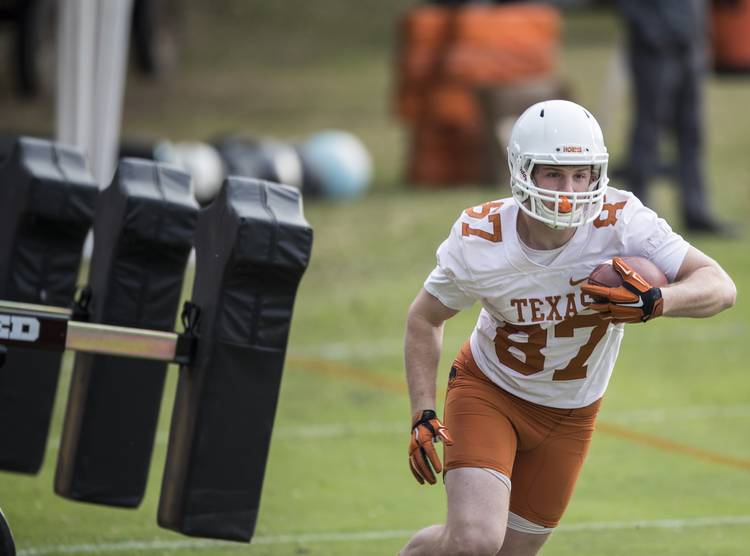 Texas tight end Garrett Gray works out during a spring practice on March 7, 2017. RICARDO B. BRAZZIELL/AMERICAN-STATESMAN

On Tuesday, a Texas spokesperson confirmed that Garrett Gray has left the football program. Gray had a year of eligibility remaining. The economics major, however, has plans on graduating this semester and entering the workforce.

Gray was recruited out of Marble Falls during the Mack Brown era, and the three-star receiver honored his commitment upon Charlie Strong’s hire. After redshirting in 2014, Gray played sparingly on special teams the following two years. He was converted to tight end by Tom Herman’s staff and was the starter at that position against Maryland.

Gray caught four footballs over two games this past season. His junior year, however, was cut short by a knee injury and a suspension from the Texas Bowl.

Following Gray’s departure, Andrew Beck and Cade Brewer are the only Texas tight ends with collegiate catches on their resume. Beck (foot) and Brewer (knee), however, suffered significant injuries last year. Reese Leitao and Max Cummins are coming off their redshirt seasons, although Cummins was a defensive lineman last year. Three-star recruit Malcolm Epps was a member of Texas’ 2018 signing class.