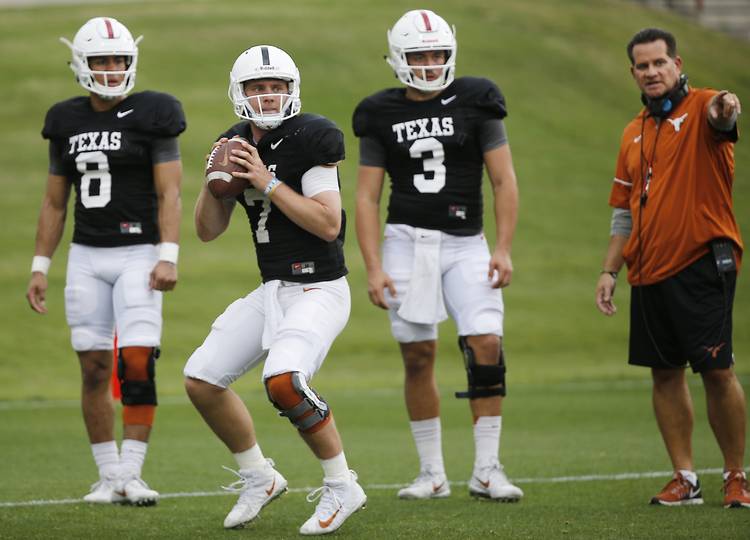 Texas held its 14th practice of the spring on Thursday, and the media was granted access to around 20 minutes of drills. Here are three observations:

1. Earlier this week, Texas coach Tom Herman had praised the progress of early enrollees Casey Thompson and Cameron Rising. It doesn’t appear, however, that the young quarterbacks are going to take significant reps away from Sam Ehlinger or Shane Buechele anytime soon.

Like they have in media windows throughout the spring, Rising and Thompson worked primarily with UT’s third-string receivers on Thursday. With graduate assistants posing as loose linebackers, Rising and Thompson threw a series of short hitches and slants to Davion Curtis, Jordan Pouncey and Philipp Moeller.

For what it’s worth, the novice receivers caught every pass thrown during the aforementioned drill. The same could not be said for the veterans, who worked with Ehlinger and Buechele but had a few noticeable drops.

Rising and Thompson were both four-star signees in Texas’ 2018 recruiting class. Rising was rated by 247Sports as the 11th-best pro-style quarterback in his class. Thompson was the nation’s 14th-best dual-threat quarterback.

2. During a portion of the practice, Texas assistant coach Drew Mehringer worked with receivers on shaking defensive backs when lined up near the goal line. The Longhorns then had to catch a pass that was lobbed at them by Corby Meekins, who is also coaching receivers this year.

Mehringer liked what he saw from Collin Johnson, John Burt and Jerrod Heard, which shouldn’t be a surprise since those three have combined for 184 receptions in their careers. Mehringer also applauded the routes run by Curtis and Moeller, who are looking for their first collegiate catches.

During the drill, Mehringer instructed incoming freshman Brennan Eagles on the usage of his hands on a cornerback’s jam. He chided Pouncey on his adjustment to a throw. He told junior-to-be Devin Duvernay to get more vertical when he jumped for the football.

3. Chris Nelson, who will be a senior this fall, continued to wear a green jersey and a brace on his left arm. Nelson has been sidelined since the Texas Bowl with an elbow injury. It doesn’t look like he’ll return to the field for the spring game on Saturday.

Nelson, however, continued to run with the first-string defense during a non-contact drill. Texas needs to replace nose tackle Poona Ford this fall. The 310-pound Nelson has compiled 70 tackles and 3.5 sacks in his career.

Due to weather threat, Texas to play Oklahoma State twice on Friday