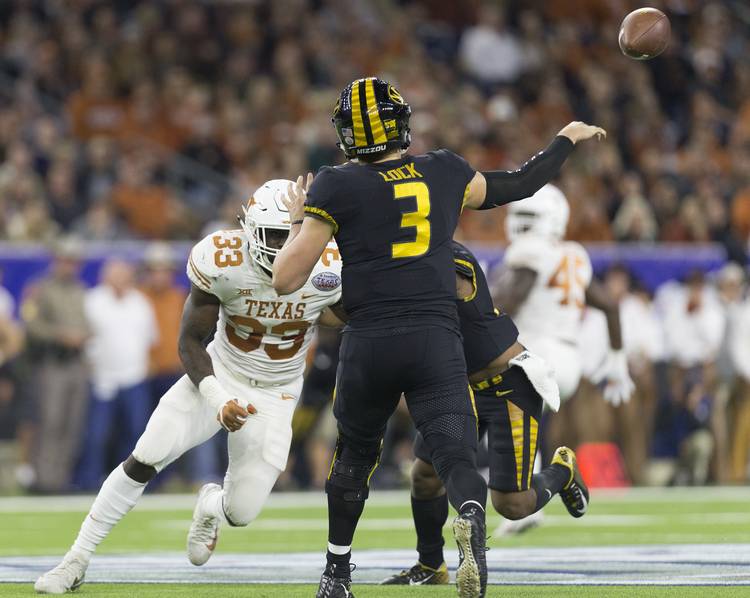 Texas linebacker Gary Johnson (33) pressures Missouri quarterback Drew Lock (3) in the first half of the Texas Bowl in Houston, on Dec. 27, 2017. (Stephen Spillman / for American-Statesman)

At the Big 12’s media days on Tuesday, Texas coach Tom Herman and his players talked about UT’s win over Missouri in the Texas Bowl. One day later, that bowl game was also a topic of conversation for the Tigers.

The Dallas Morning News reported that Missouri quarterback Drew Lock was asked at the SEC’s media days about Herman’s sideline antics in December. During the bowl game, Lock celebrated his only touchdown pass with his “secure the bag” dance. Herman and a few Longhorns were later caught by TV cameras doing that same celebration.

Texas recorded a 33-16 win over Missouri in the Texas Bowl.

After the Texas Bowl, Lock said “When the head coach is mocking your dance move, you must be doing something right.” Lock seemingly sang the same tune on Wednesday while also taking a jab at the 43-year-old Herman.

Said Lock: “If a head coach — Does anyone know how old he is? I don’t know — a head coach at the University of Texas, which is one of the top five programs of all time, is mocking a dance I do after I throw a touchdown, I think I’m playing some pretty good quarterback right there at that time.”

Lock also told the Dallas Morning News that his dance was not directed at Texas. He insisted he was celebrating with his team.

TEXAS HISTORY: 40 years ago this December, Texas played Maryland — it didn’t go well for the Terps