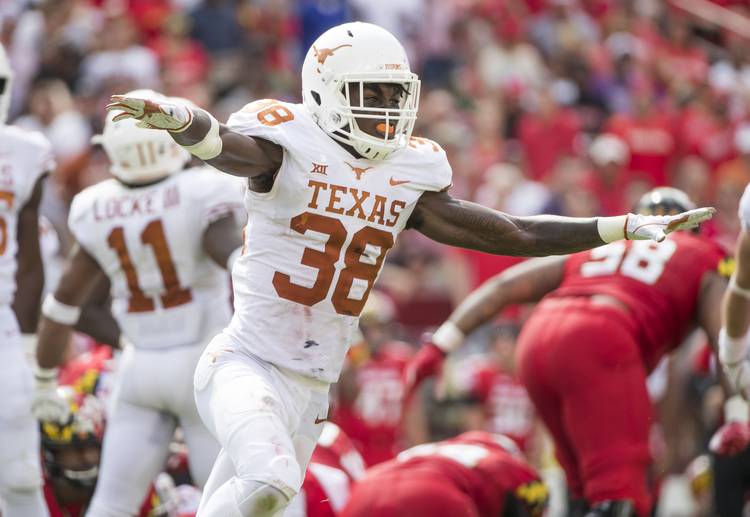 Texas defensive back Kobe Boyce (38) celebrates a stop against Maryland in Landover, Md., on Sept. 1 , 2018. RICARDO B. BRAZZIELL / AMERICAN-STATESMAN

On Saturday, a few freshmen will have a chance to step to the front of the class at DBU.

After arriving late to a team function, senior cornerbacks Kris Boyd and Davante Davis will miss at least the first series of Saturday evening’s game at Oklahoma State. Until Boyd and Davis’ punishments are completed, Texas coach Tom Herman said the Longhorns will play some sort of cornerback combination of freshmen Anthony Cook, Jalen Green and Kobe Boyce.

In five of its seven games, Texas has surrendered a score on its opponent’s first drive. Oklahoma State boasts the NCAA’s 22nd-best passing offense (291.9 yards per game). Cowboy senior Taylor Cornelius’ 16 touchdown passes rank 15th nationally, but he has been intercepted eight times and is completing only 59 percent of his passes.

Both Boyce and Cook earned quality reps earlier this season in place of an injured Davis. The six-foot, 175-pound Boyce even started in a 28-21 win over Tulsa. What, though, do you need to know about these freshmen?

A redshirt freshman and three-star member of UT’s 2017 recruiting class, Boyce has appeared in five games. Boyce compiled nine tackles over UT’s first two games, but he noticeably struggled against Tulsa. Defensive coordinator Todd Orlando still praised Boyce after he faced the Golden Hurricane and said that “The kid has come a long way since we’ve been here.”

Cook and Green were both four-star recruits, and Cook participated in UT’s spring practices. In February, American-Statesman recruiting analyst Mike Craven described the six-foot, 190-pound Cook and the six-foot, 185-pound Green as “the best two outside cornerbacks in the class.” Cook and Green are Houston natives who both participated in the 2018 U.S. Army All-American Bowl.

This year, Cook has played in all seven of UT’s games and mostly contributed on special teams. Green has appeared in four contests.