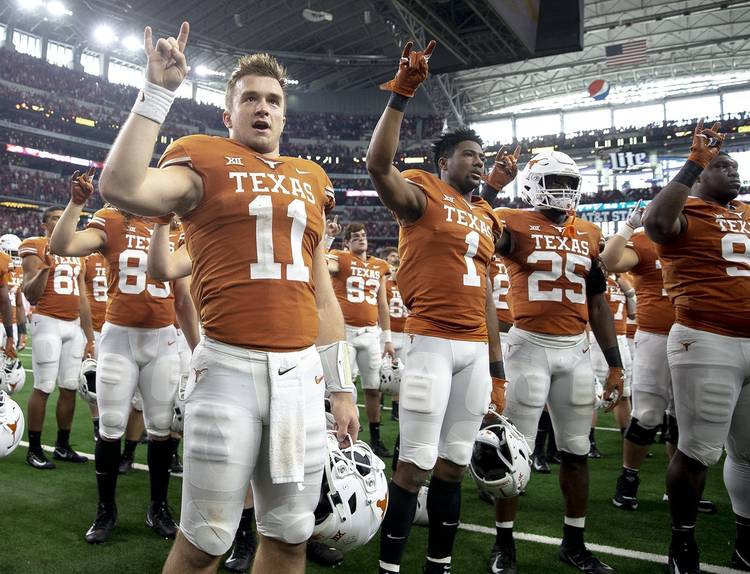 Texas quarterback Sam Ehlinger (11) and his teammates sing "The Eyes of Texas" after the Big 12 Conference championship loss to Oklahoma in Arlington on Saturday. [NICK WAGNER/AMERICAN-STATESMAN]

Instead of playing in big bowl games, the group first endured back-to-back losing seasons. Texas turned the corner in 2017 and climbed back into Big 12 title contention and the national spotlight this year.

“It’s going to be a ton of fun,” said Beck, a senior captain who had his best season this year with 26 catches. “Our senior class has made it our mission to get this program back to where it needs to be, and this is a reward and justification for all of the hard work.”

It’s the first time these two programs have met since the 1984 Cotton Bowl. The Horns hold a 3-1 record in the all-time series. Texas Athletic Director Chris Del Conte agreed to a home-and-home contract with Georgia for 2028-29. No need to wait that long now.

Tickets for this game start at $150, according to Ticketmaster. The Sugar Bowl will be broadcast on ESPN.

On a Sugar Bowl conference call, he said, “I watched their championship game, and I know what a formidable opponent Georgia will be.”

This will be UT’s first bowl trip outside of the state since 2011. Ever since then, it’s been nothing but trips to San Antonio and Houston — or nothing at all in 2015 and ’16. Going to New Orleans will be an entirely different experience.

“I certainly don’t want to put words in their mouth,” Herman said of Texas’ 26 seniors. “But considering what this senior class has gone through as a group and to know that they’re the class that led Texas back to a New Year’s Six bowl game, I’m sure there’s a lot of pride and excitement with that senior class.”

Said defensive tackle Chris Nelson: “To have a chance to leave a legacy on the program and get it back to the level that Texas needs to be at is special. To end our careers playing in the Big 12 championship game and the Sugar Bowl is something we will never forget. We are excited to start preparing.”

Georgia coach Kirby Smart fielded multiple questions Sunday afternoon about his program being left out of the College Football Playoff. The Bulldogs were ranked fourth last week going into the SEC championship game, gave No. 1 Alabama a full test before losing 35-28 and then fell to fifth.

That opened the door for Oklahoma, the 12-1 Big 12 champion, to jump into the national semifinals and face Alabama.

“As far as our players and our team, these kids recover faster than you think they do,” Smart said.

Smart said he’s been friends with Herman for years and has respect for the UT coaching staff, including defensive coordinator Todd Orlando. This will be Georgia’s first appearance in the Sugar Bowl since the end of the 2007 season.

“Our fans have never really let us down,” Smart said. “We have not been to the Sugar Bowl in quite a long time. I know that they’ll follow us. They follow us all over the country, and they’re passionate about football.”

This will be UT’s first appearance in the Sugar Bowl since the 1995 trip after winning the final Southwest Conference championship. No. 13 Virginia Tech won 28-10, capping a bowl trip more remembered for the weird instance of an imposter hoax.

UT’s Ron Weaver was outed for faking his age and changing his name to Ron McKelvey. Weaver later pleaded guilty to the false use of a Social Security number. He had already exhausted his eligibility and wanted to prolong his career.

“Having been to the Sugar Bowl as a coach myself, I know what a fantastic operation it is,” Herman said. “I told our team that they’re going to have a wonderful time; they’ll be treated as first class as possible of any bowl game out there. Again, it’s a tremendous honor to be a part of that.”

Sterns injury update: Herman said freshman safety Caden Sterns was scheduled have an MRI on his injured knee Sunday. He missed the second half against OU and returned to the field on crutches. Sterns’ availability for the Sugar Bowl is unknown at this point.