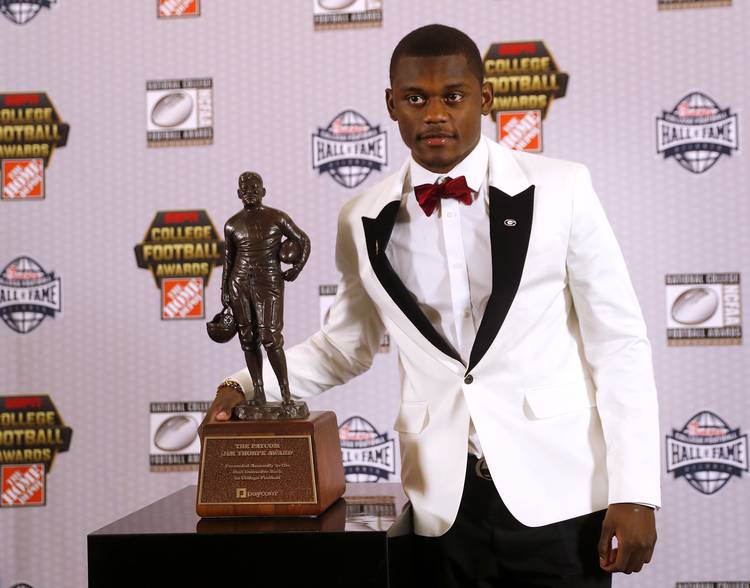 Georgia's Deandre Baker poses with the trophy after winning the Jim Thorpe Award in Atlanta on Dec. 6, 2018. (AP Photo/John Bazemore)

In the Sugar Bowl, UT’s best will get to face the nation’s best.

Baker told reporters this week that he will play against Texas in the Sugar Bowl. Over the past few years, some NFL prospects — including Texas’ Connor Williams and DeShon Elliott last year — have skipped their college’s bowl games in an attempt to get a head start on the preparation for their professional careers. The most-recent mock draft on walterfootball.com has the 5-11, 185-pound Baker pegged as the 12th overall pick in the 2019 NFL Draft.

Baker’s commitment to playing in the Sugar Bowl sets up a marquee match-up in New Orleans. The Texas receiving corps boasts two draft prospects in juniors Collin Johnson and Lil’Jordan Humphrey. Regardless of whether they enter the NFL Draft, both Humphrey and Johnson are expected to play in the Sugar Bowl.

A 6-4, 225-pound slot receiver who Texas coach Tom Herman once called the “best player” on the UT offense, Humphrey leads Texas in receptions (79) and receiving yards (1,109). He ranks fifth on UT’s single-season record books in both of those statistical categories. Humphrey is also one score away from becoming the seventh player in school history to catch 10 touchdowns in one season.

The 6-6, 220-pound Johnson, who typically lines up on the outside, is coming off a 177-yard game against Oklahoma. He has scored on seven of this season’s 65 catches. Johnson needs only 55 yards to give UT its first 1,000-yard tandem since Quan Cosby and Jordan Shipley accomplished that feat in 2008.