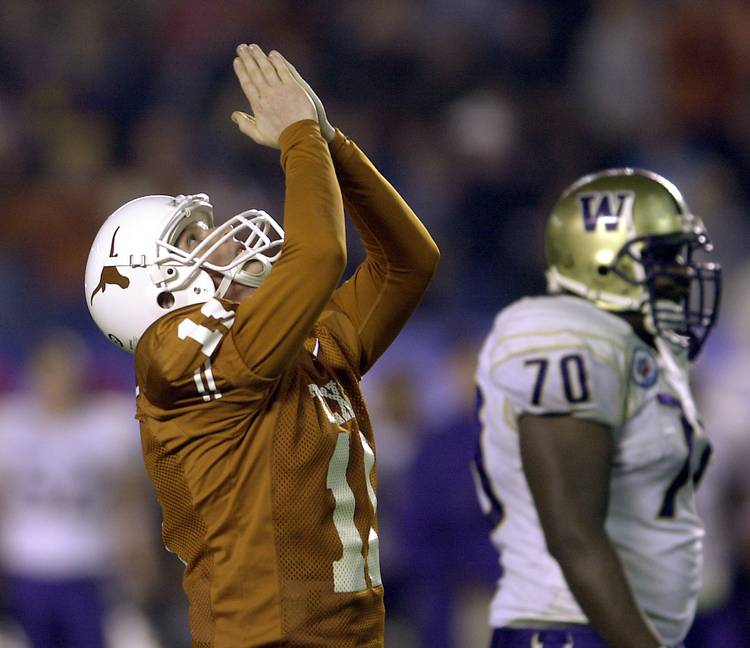 Major Applewhite celebrates after throwing a pass to Roy Williams for Texas's second touchdown against Washington at the Culligan Holiday Bowl at Qualcomm Stadium in San Diego, Calif., on Dec. 28, 2001. (Rodolfo Gonzalez/American-Statesman)

On New Year’s Day, Texas and Georgia will battle in the Sugar Bowl. This will be the 55th appearance in a bowl game for both Texas and Georgia, a mark that has been exceeded nationally by only Alabama.

Over the course of UT’s previous 54 bowl games, some individual performances have stood out more than others. Here is a look at a few of the Longhorns’ bowl-game records:

No Longhorn has had a bigger impact on a bowl game’s scoreboard than Bobby Layne, who carried UT to a 40-27 win over Missouri on Jan. 1, 1946. Thanks to the four touchdowns he scored and four extra points, Layne accounted for 28 points. He also threw for two touchdowns in the win. The six total touchdowns and 28 total points have not been matched in the 51 bowls that UT has played since.

Layne wasn’t done making history in 1946. The then-sophomore threw the first two no-hitters in the history of UT’s baseball program that spring. One of those no-hitters came at the expense of Texas A&M.

Only two Longhorn receivers have produced a 200-yard game, and Tony Jones became a pioneer when UT beat Pittsburgh 32-27 at the Astrodome in Houston. (In 2009, Jordan Shipley went for 273 yards in a regular-season game). Jones needed only eight catches during his 242-yard day. The rest of the Longhorns combined for 12 catches and 126 receiving yards on New Year’s Eve.

Playing against the nation’s fourth-rated scoring defense, Jones had a 77-yard touchdown reception on the game’s first play. Jones scored again in the first quarter on a 60-yard reception. Those two touchdowns are the fourth and 10th-longest recorded by a Longhorn in a bowl game.

The Bluebonnet Bowl, which was first staged in 1959, was discontinued after the 1987 season.

Texas only held a 14-3 lead at halftime, but the Heisman Trophy winner scored twice during a 24-point third quarter. The win was UT’s 10th in the Cotton Bowl. The Longhorns now hold a 11-10-1 record in that contest.

Behind a big day from Major Applewhite, Texas squeezed by Washington in the 2001 Holiday Bowl. In the 47-43 victory on Dec. 28, 2001, Applewhite threw for 473 yards and four touchdowns. No Longhorn has ever exceeded those numbers in a bowl game. Applewhite’s 476 yards of total offense is also a school standard for bowl games.

The 473 passing yards compiled by Applewhite in the Holiday Bowl is an overall record at Texas, which has had a quarterback throw for 400 yards on only five occasions. That mark almost doubled the 245-yard effort from Chris Simms in the previous year’s trip to the Holiday Bowl, which had been UT’s third-best postseason performance.

On Jan. 4, 2006, Young sprinted into Longhorn lore on an eight-yard touchdown run. UT fans, though, may be surprised to hear that the only postseason record that Young set for Texas that evening was established with his arm. In that 41-38 win over USC, Young completed nine straight passes.

One year after he closed out the 2005 Rose Bowl with six straight completions, Young connected on his first nine passes against USC. Those nine throws resulted in 72 of Young’s 267 passing yards. Young also ran for 200 yards and three touchdowns in the toppling of the Trojans.

Those who root for Texas and the UT record books both have fond memories of Colt McCoy and Quan Cosby’s performances on Jan. 5, 2009. The No. 3 Longhorns were able to knock off No. 10 Ohio State when Cosby scored on a 26-yard reception with 16 seconds remaining. The 24-21 triumph was Texas’ fifth straight win in a bowl game, which is a feat that the Longhorns have accomplished twice in their history.

The 26-yard touchdown was McCoy’s 41st completion and 58th pass attempt. It was also Cosby’s 14th reception. Those are all bowl-game records at UT, and McCoy’s 41 completions is an overall standard at the school.

Not to be completely overshadowed by Cosby, but Shipley caught 10 footballs in the Fiesta Bowl. Cosby and Roy Williams, who had 11 receptions in the 2001 Holiday Bowl, are the only Longhorns who have fared better in a bowl game.

Even with the addition of Roschon Johnson, Texas doesn’t expect to lose any quarterbacks