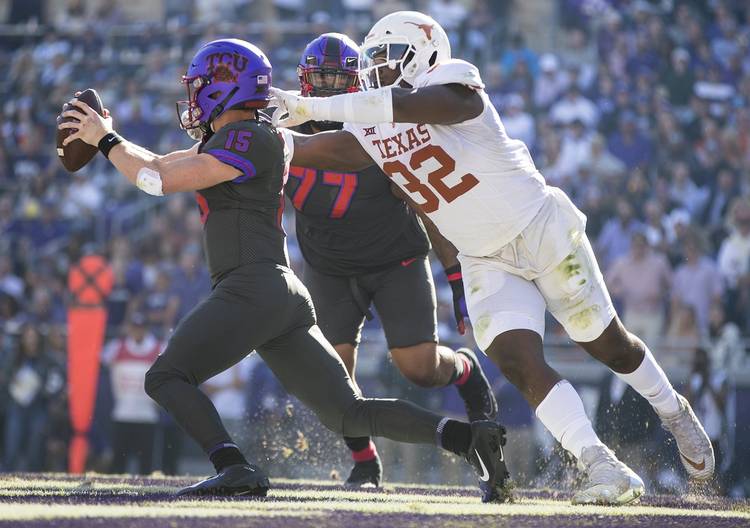 Texas Longhorns defensive lineman Malcolm Roach (32) tries to get the safety in the end zone against TCU Horned Frogs quarterback Max Duggan (15) in the second quarter during an NCAA college football game at Amon G. Carter Stadium in Fort Worth, Texas [RICARDO B. BRAZZIELL/AMERICAN-STATESMAN]

The Longhorns are back in action after a nail-biter against Kansas ended on a last second field goal by Cameron Dicker to seal the win for Texas. TCU stands in the way of a winning streak for Texas as they kickoff today at 2:30 pm. For live updates, photos and analysis from the American-Statesman’s Brain Davis, Danny Davis, Kirk Bohls and Cedric Golden, checkout our Gameday page below:

So to recap Texas injuries, CB Jalen Green should play vs. TCU. Next week Horns are idle, so they project to get Foster, Overshown, Sterns, McCulloch, Whittington back for November.

Texas WR Brennan Eagles will not start today due to missing Tuesday because of what's been termed a personal day, per UT play-by-play man Craig Way.

In other news, No.5 Oklahoma is no longer undefeated, losing to Kansas State, 48-41.

A live look at all of the Texas fans who were tired of being clowned by their Sooner friends for the close call against Kansas. pic.twitter.com/uB995XeoIF

The Longhorns got on the board first after a field goal by Dicker.

Dicker the Kicker gets a 21-yard FG after Ehlinger is stopped just short of the first-down line at the TCU 3. Horns take early 3-0 lead. 6:32 left in 1Q.

Interception Texas. Easy pick for Brandon Jones, which is also Duggan's first INT of the year. Then, UT's Owens flagged for a blindside block but the turnover stands.

But TCU got it right back after intercepting Sam Ehlinger.

Interception TCU. Ehlinger with a direct throw over the middle to Duvernay. TCU's Wallow reads it well, make the grab. Frogs take over at the Horns 20.

Horned Frogs capitalized on the turnover with a game-tying field goal.

After the the first quarter ended tied at 3, the Horned Frogs jumped ahead of the Longhorns with the first touchdown of the game.

Touchdown TCU. Duggan drops a dime right into a bevy of Longhorns, and somehow the Frogs emerged with a 24-yard score.

The Longhorns answered right back with a 47-yard touchdown from Ehlinger to Devin Duvernay. Ehlinger tied Chris Simms for third all-time in touchdown passes at Texas with 58 on this throw.

Devin Duvernay with a 47-yard touchdown catch on a drive that featured a 17-yard grab by Collin Johnson. I think now is a great time for some shameless self-promotion.https://t.co/WlBogCya4Y #HookEm

Texas got the ball back on ensuing kickoff after a TCU fumble, the Horned Frogs’ second turnover of the game. However, the fumble led to a missed field goal by Dicker.

Turnover TCU. Reagor fumbled the kickoff, caused by Vaughns. Cosmi gets on it. Great special teams play. Texas will take over. They'll review it, of course.

A back and forth defensive battle finally broke just before the half with Ehlinger throwing his second touchdown pass of the day. He passed Simms for third all-time in touchdown passes at Texas with that throw.

Texas with an easy walk-in touchdown as Ingram slips out of the backfield and catches 17-yard pass with no one even nearby.

TCU hit a field goal with no time left in the first half to make it a 4-point game at the break.

Halftime in Fort Worth: Texas 17, TCU 13. Kell finishes the first half with a 52-yard FG on his second attempt. Horns will lament their missed chances. Interesting 30 minutes ahead.

A fake punt and a 63-yard play helped the Longhorns extend the lead to 20-13 in the third quarter.

Fake punt! Herman rolls the dice on fourth-and-1 and Bujcevski gets 3. Texas will keep it.

TCU responded with a touchdown drive of it’s own to tie the game at 20.

Touchdown TCU. Duggan left the field with a problem with his shoe. So Frogs line up Olonilua, takes a direct snap and goes in himself. A 51-yard strike to Barber set it up. Tied up again 20-20.

Another Ehlinger interception led to another TCU touchdown, giving the Horned Frogs a 27-20 lead with 4:17 left in the third quarter.

Interception TCU. Ehlinger tried to get a ball to Jake Smith. But Washington cuts in front of him and the Frogs will have it at the Horns 44.

Touchdown TCU. Duggan with a deep ball, and it's a 44-yard TD. The Frogs now go in front.

TCU extended its lead with a field goal to make it a 30-20 games early in the fourth. The Longhorns responded with a touchdown, ending a scoring run by TCU.

Touchdown Texas. Johnson off left tackle from 2 yards out. But this drive was all Ehlinger. His big runs moved the ball down the field. Texas now down 30-27. 6:50 left.

TCU then put the game away with a touchdown after a long drive.

Touchdown TCU. Duggan takes it in himself, and now the Frogs are up two scores. Frogs with 429 total yards and counting.

And a fourth interception of Ehlinger for the exclamation point on a TCU win, 37-27.