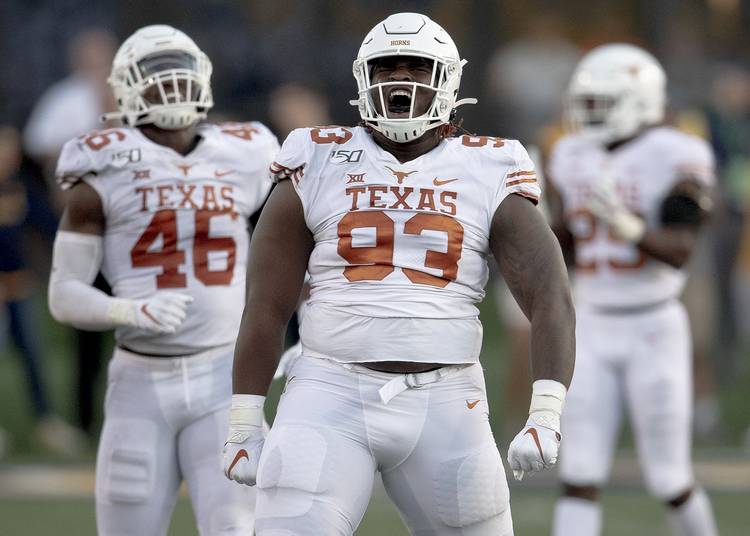 SAN ANTONIO — With two days to go before the Alamo Bowl, Texas held a practice on Incarnate Word’s campus. The media was granted access to a portion of Sunday’s drills.

If Sunday’s practice revealed anything, it was that Texas’ starting quarterback against Utah will be… senior safety Brandon Jones?

OK, maybe not. There were some confused onlookers on Sunday, though, as Texas had some fun at its last practice of the season. Players were allowed to swap jerseys with their teammates on Sunday so UT quarterback Sam Ehlinger worked out in Jones’ jersey.

It’s jersey swap day at Texas and look at the leg on… Reese Moore? #HookEm pic.twitter.com/TSj954yCEW

Some of the exchanged numbers were practical (receiver Collin Johnson and running back Roschon Johnson). At least one of the jersey swaps was sentimental (twin brothers Devin and Donovan Duvernay). And in a few instances, the wardrobe changes just solicited laughter. For example, 300-pound lineman Junior Angilau squeezed into the No. 44 that is assigned to safety Tyler Owens.

2. UT’s future on the defensive line

Texas will soon have to replace senior defensive lineman Malcolm Roach, an 18-time starter and team captain. Roach heads into his final game with 130 career tackles and seven career sacks.

Texas could switch to a four-man front under new defensive coordinator Chris Ash and Roach doesn’t expect the cupboard to be bare.  The Longhorn will return two starters in defensive linemen Ta’Quon Graham and Keondre Coburn. Roach also had good things to say about freshmen T’Vondre Sweat, Myron Warren and Daniel Carson.

Said Roach about Sweat: “T’Vondre, he’s a man-child. Probably the most physically-gifted defensive lineman in our room, to be honest. … Getting a season under his belt, seeing what it’s like to play college football was big for him. now he’s going to be able to prepare and know what he’s doing when he’s on the field, not just reacting.”

Said Roach about Warren: “Myron’s only been playing football for three years now, I think. He’s a guy that’s been developing, still understanding football but a guy that has a motor and if you have a motor, you can play football.”

Ahead of the Alamo Bowl, fans may catch Roach running a few routes in the receiver line. That has not been an uncommon sight during pregame warmups this season. Roach said he actually spent three practices with the tight ends upon his arrival at Texas, so he likes to show the offensive players that he’s still got it. “The guys over there know I can catch,” Roach said.

3. Homecoming at the Alamodome

The player wearing Caden Sterns’ jersey on Sunday — junior Derek Kerstetter — practiced on UT’s offensive line. But when the Alamo Bowl kicks off, No. 7 will return to the Texas secondary.

Like Kerstetter, Sterns grew up in the San Antonio area so this game will serve as a homecoming of sorts. In fact, Sterns estimated that he played six or seven times at the Alamodome while attending Cibolo Steele High. Will Sterns have the biggest cheering section on Tuesday? He said that tickets were tough to round up but “I’ve got a decent amount of people.”

Sterns missed four games this season with a knee injury. He also injured a rib during UT’s regular-season finale against Texas Tech. Earlier this weekend, Sterns called this season both mentally and physically draining but added that he was excited to get back on the field.