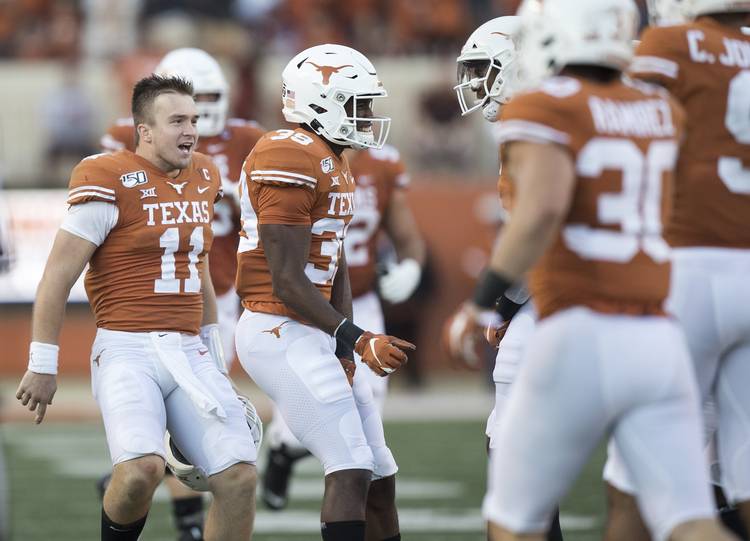 With its 2020 football season set to start this weekend, Texas has added two new names to its roster.

Running back Gabriel Watson and receiver Brenden Schooler have officially joined the Longhorns as graduate transfers. The additions of Watson and Schooler were previously reported, but Texas had not acknowledged their arrivals. Watson will wear No. 25 this season. The No. 81 jersey has been assigned to Schooler.

According to Texas coach Tom Herman, both Watson and Schooler will be available for the Longhorns’ opener against UTEP on Saturday. Herman said that Schooler was recently cleared to practice and has been running with the second-string offense. Herman added that Watson added depth and a different skill set to his room of running backs.

“In a year like this you can never have too much depth,” Herman said. “Those guys are veteran guys that will add a lot of value to their respective rooms.”

Watson comes to Texas after spending the past two years at the University of Sioux Falls. No Division II player topped Watson’s 26 touchdown runs in 2018. With 1,957 rushing yards, Watson finished second among Division II runners to Notre Dame College’s Jaleel McLaughlin that year. (McLaughlin had 464 more yards but 109 additional carries).

Schooler originally intended to be a graduate transfer at Arizona in 2020, but he was on the move again after the Pac-12 postponed its football season. Schooler’s brother, Colin, also transferred from Arizona and will be a graduate transfer on Texas Tech’s defense this fall. Over four years at Oregon, Schooler caught 43 footballs and was a two-time all-conference honoree on special teams.

Injuries defined Watson and Schooler’s 2019 seasons. Watson missed most of the campaign with a hamstring injury. After having offseason foot surgery, Schooler returned for three games and then entered the transfer portal.

After going undrafted, Malcolm Roach among the Texas exes set to open this fall on an NFL roster

Tom Herman: What Texas’ coach likes about his team, and what he’s worried about