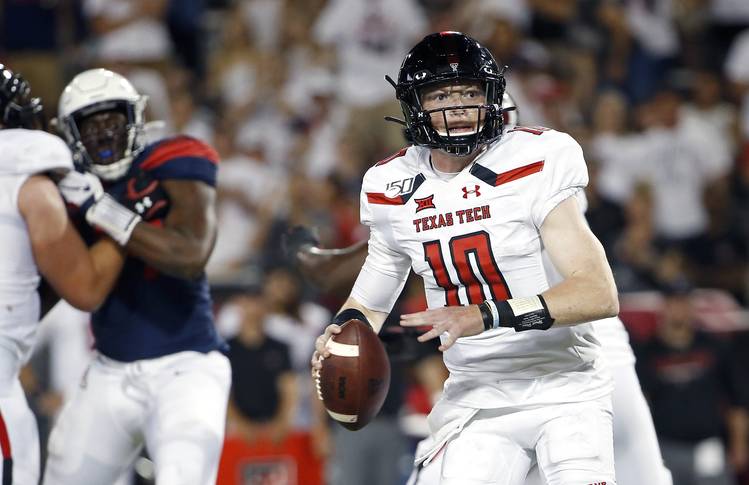 Texas Tech quarterback Alan Bowman (10) looks for a receiver during a game against Arizona in Tucson, Ariz on Sept. 14, 2019. (AP Photo/Ralph Freso, File)

It took three years, but Alan Bowman will finally get to introduce himself to Texas’ defense this weekend.

Bowman will likely be Texas Tech’s starting quarterback when the Red Raiders host UT on Saturday afternoon. This is Bowman’s third year at Texas Tech. He, however, has never faced the Longhorns. Bowman missed the 2018 meeting between these in-state rivals — a 41-34 win for Texas in Lubbock — with a collapsed lung. A shoulder injury sidelined him for his team’s 49-24 loss at Royal-Memorial Stadium in 2019.

The 6-3, 215-pound Bowman was a three-star prospect when he was signed out of Grapevine High. He has shown flashes of brilliance at Texas Tech. Bowman threw for 605 yards in the third game of his collegiate career, and that effort against Houston is the fifth-best effort in school history. Over his 12 career games, Bowman has averaged 340.7 passing yards.

“We had always thought, when healthy, this guy was one of the better ones in the Big 12. I think he proved that two Saturdays ago with his performance against Houston Baptist” Texas coach Tom Herman said on Monday. “We definitely know that he is more than capable. He is one of the better ones, again, in our league and we’re going to have our work cut out for us.”

When it comes to passing yards in 2020, Bowman enters this week with a four-yard lead on the Big 12’s leaderboard. Two weeks ago, Bowman threw for 430 yards in a 35-33 victory over Houston Baptist. Sam Ehlinger, meanwhile, sat out much of the second half of Texas’ route of UTEP on Sept. 12, but the senior quarterback still compiled 426 yards through the air.