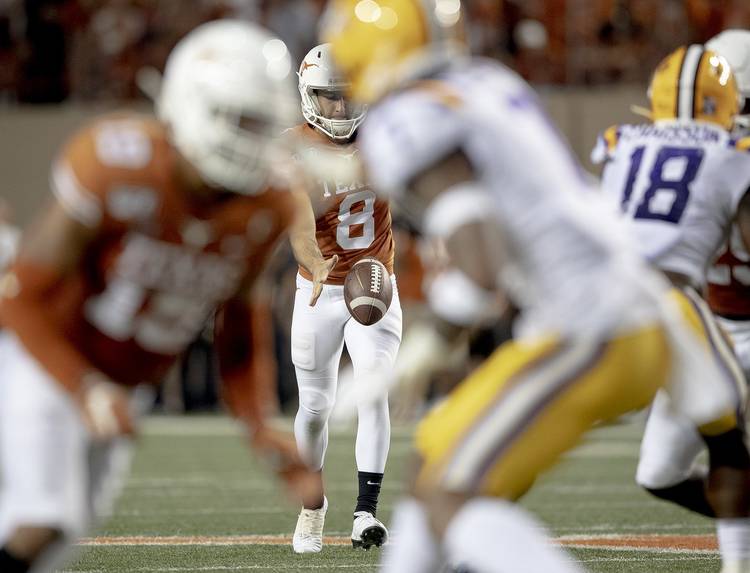 Ryan Bujcevski (8) punts the ball for Texas during a game against LSU on Sept. 7, 2019 in Austin. [NICK WAGNER/AMERICAN-STATESMAN]

On Monday, the Big 12 honored Baylor’s Trestan Ebner as its special teams player of the week.

That seemed like a no-brainer pick since Ebner scored on two kickoff returns in a 47-14 rout of Kansas this past Saturday. In another week, though, perhaps Jahdae Barron, Tyler Owens or Malcolm Epps would have been considered for that award. In UT’s 63-56 win at Texas Tech, Barron tallied a touchdown off of Owens’ blocked punt. Epps later recovered a key onside kick during a frantic rally that forced overtime.

But that same special teams unit also recorded a few lowlights in Lubbock. Texas failed to jump on an unexpected onside kick in the second quarter. Texas Tech also turned a muffed punt return by D’Shawn Jamison into a touchdown.

Set up at the Texas 49 after the shanked punt, Texas Tech quickly put together a 3-play scoring drive. The Longhorns did force a turnover after the blocked punt.

On Monday, Texas coach Tom Herman was dismissive of the punt that was nearly blocked. Herman said that punter Ryan Bujcevski “didn’t hit his launch point and so the guy got closer than expected.”

As for the punt that was blocked, Herman assessed that his team simply messed up a blocking assignment. Texas has long used starters and full-time contributors on special teams, and players like tight end Cade Brewer and running back Roschon Johnson were asked to block alongside captains Chris Brown, Joseph Ossai and Caden Sterns on that punt. A lane, however, opened up the middle after the snap. Morgenstern was able to fight off a block by Brewer, who was serving as one of the upbacks, and get his hand on the football.

“It was not a schematic issue. Same scheme we’ve been running for four years here,” Herman said. “We missed a block on the one that got blocked.”

A junior, Bujcevski is averaging 40.1 yards per punt this season. That ranks sixth in the Big 12. Junior kicker Cameron Dicker, who last punted in high school, is listed on the depth chart as Bujcevski’s back-up.