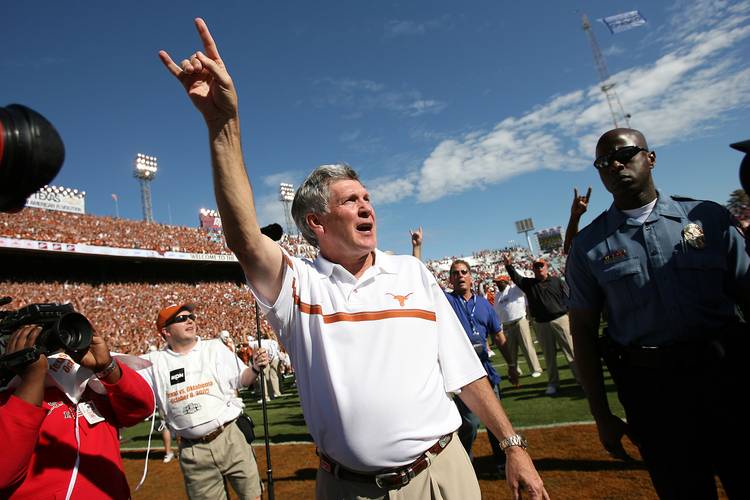 “This guy won 30 straight games in the 1960s and I wanted to get you two together,” said Brown to Carroll, whose Trojans have a NCAA-best 34-game win streak.

Brown and Carroll posed for photos and fielded questions from the media for the final time Tuesday morning. The questions weren’t any different from the ones that have been asked for the last month since the coaches found out they would be meeting in the Rose Bowl for the national championship.

“You have a day and a half-life with this football team,” said Brown, whose Longhorns have won 19 straight but enter as a seven-point underdog. “This has been a fun ride with these kids, starting with last season’s Rose Bowl.”

Ah, the 2005 Rose Bowl, the 38-37 win over Michigan that vaulted quarterback Vince Young into national prominence and placed Texas back into the elite group of national title contenders.

Brown has referenced that Rose Bowl experience several times this season, along with a 25-22 road win at Ohio State, as benchmarks that give his team as good a chance as any against USC, a juggernaut that has been trumpeted by ESPN as the greatest offense in NCAA history.

One reporter commented that the Longhorns’ 50.9 points-per-game average lead the nation, just ahead of USC’s 50 point average.

Brown could top off an historic period in his career with a win here. He nearly apologized for taking eight seasons to make it to a title game, but expressed no surprise at being in this position. He confidently said his team is prepared to take its best shot with a chance to bring Texas its first national football title since 1970.

Carroll has two national titles already but downplayed the Trojans’ current winning streak, saying it would mean nothing without the 35th win in a row, which would match Royal’s three national championships in 15 less seasons.

“I trust our team completely,” he said. “The preparation has been perfect.”