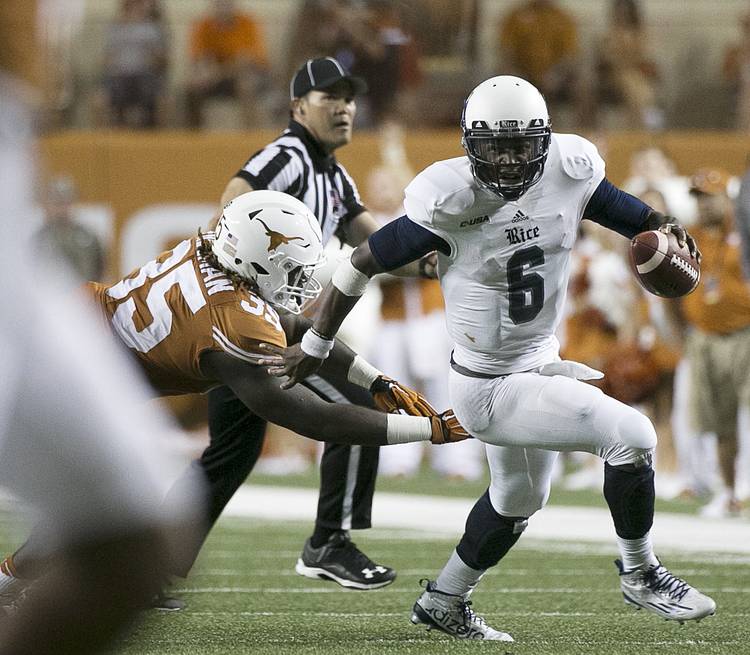 Texas's Edwin Freeman reaches out for Rice's Driphus Jackson during the second half of their game at Royal Memorial Stadium on Saturday, September 12, 2015. DEBORAH CANNON / AMERICAN-STATESMAN

Many believed Ed Freeman’s fall in the last few minutes of Saturday night’s game to be a fake injury, a ploy to slow Cal’s offense.

Gifs, like the following from SB Nation, mocked the move from the Texas linebacker.

Freeman told the American-Statesman on Monday that he fell before the play on coach’s orders, so he could leave the game because of a shoulder injury that he would later find out would put him out for six to eight weeks.

It proved too late, however, as since Saturday the Internet had already immortalized the moment in a slew of Gifs, parodies and mocking tweets.

At a loss for why Freeman fell, one YouTuber used footage from “American Sniper” to suggest multiple possibilities.

Others called out Charlie Strong and Freeman on social media:

Texas defender with the worst fake injury acting job I've ever seen. Will be on daytime ESPN shows all week.

The worst football injury is when you look at the sideline and your whole body stops working http://t.co/Vk8JPjKAEz pic.twitter.com/MqO1DKyLkU

When you're not supposed to be on the field and don't know what to do, just fake an injury. https://t.co/lNCA1YG1Op