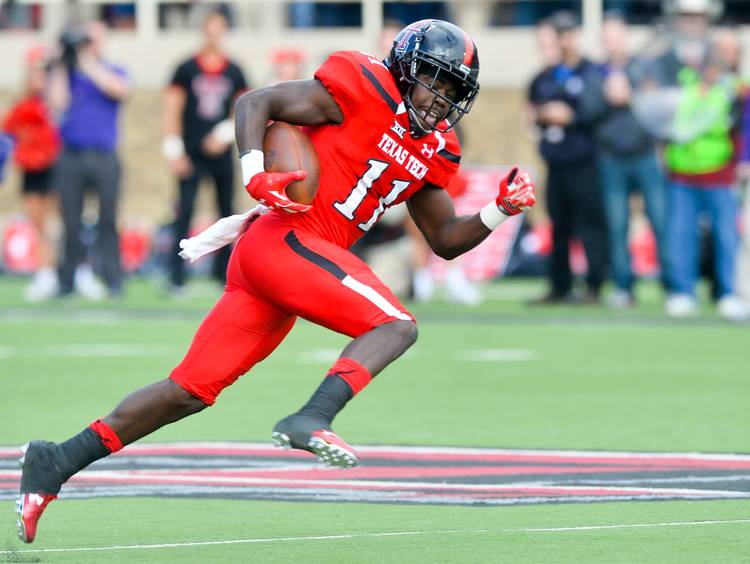 Texas Tech's Jakeem Grant gets yards after making a catch against the Kansas State Wildcats on November 14, 2015, at Jones AT&T Stadium in Lubbock, Texas. (Photo by John Weast/Getty Images)

Tech quarterback Patrick Mahomes has plenty of options at his disposal. Jakeem Grant has six touchdown catches and 1,038 receiving yards. Devin Lauderdale and Reginald Davis both average more than 14 yards per catch. Tech ranks second nationally in passing yards per game (391.3). It’s a tall order for Duke Thomas, Holton Hill, Davante Davis, Dylan Haines and Jason Hall. The key against these pass-happy offenses is to let them move between the 20-yard lines all day long. Texas must play air-tight zone coverage near the goal line and force field goals.

Texas coach Charlie Strong said on Monday that running backs Johnathan Gray (turf toe) and D’Onta Foreman would be either doubtful or out on Thursday. Hard to imagine Gray not trying as hard has he can to get on the field in what would be his final home game. Foreman had surgery to repair a broken right pinkie finger last week. That means freshmen Chris Warren and Kirk Johnson will get the call. Tech allows 259.9 rushing yards per game, one of the highest totals in college football. Warren has a big, bruising running style. There should be plenty of room to roam.

Texas right guard Patrick Vahe (knee injury) is not expected to play, which means more playing time for Sedrick Flowers and Tristan Nickelson. That shouldn’t worry quarterbacks Jerrod Heard and Tyrone Swoopes. The Red Raiders simply haven’t pressured the quarterback much all season. Not a single player among Tech’s top five tacklers has a sack. Linebacker Peter Robertson has five, but there’s only only sack listed among the next five tacklers. Tech has been credited with only 13 quarterback hits all season long. Heard should have plenty of time to sit back and look for John Burt, Marcus Johnson or Daje Johnson.

Texas’ kickoff return numbers are deceiving. They don’t truly reflect Rose’s solid year. Rose has boomed 37 kickoffs (or 74 percent) for touchbacks. Only two have gone out of bounds. But it’s feast or famine; opponents have returned only 10 kicks, but they average 25.6 yards per return. Grant doesn’t care how deep anyone can kick it. He has two returns for touchdowns this season (93 and 100 yards). It’s imperative that UT’s kickoff team covers the field well. Rose will likely do his part, but if Grant gets loose, that helps the Red Raiders establish good field position.

TEXAS’ SIDE OF THE SCOREBOARD VS. TECH’S SIDE

There’s a chance UT could play well and still lose, only because the Longhorns are not built to score enough points to keep up. Tech is a middling team that still averages 46.5 points per game; Texas has managed 40 points only once since mid-September. The Red Raiders scored 53 points against Oklahoma State and still lost. They needed 59 to beat the Kansas State Wildcats. Games like this are nightmare scenarios for defensive coaches, which is why all they care about is the bottom-line win or loss. The Horns have always done well in this series, though. Tech has won only two games since 2002.