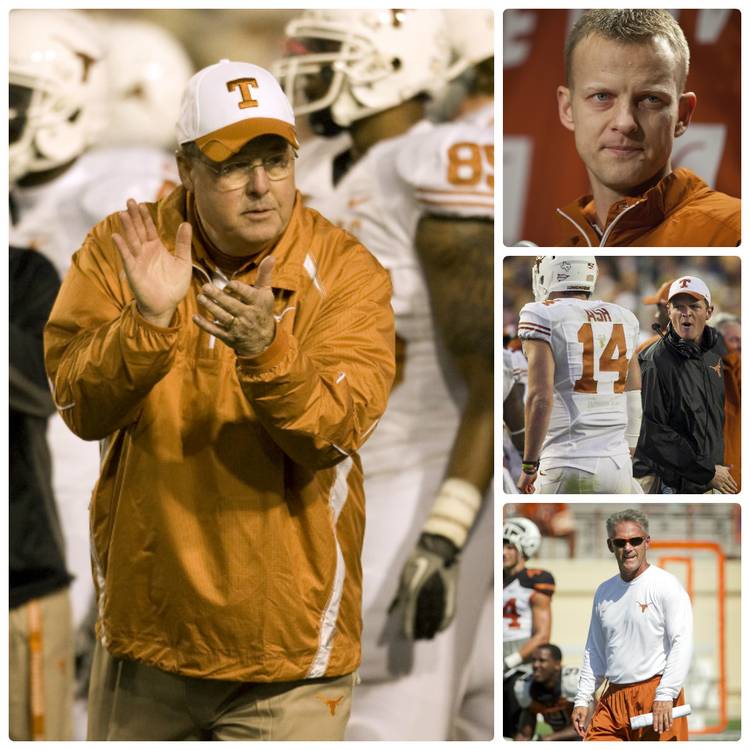 Last month Texas hired Sterlin Gilbert as its new offensive coordinator. Let’s a take a look at the men he’s following at Texas.

Davis was connected to Mack Brown going back to the mid-1980s, when he served as Brown’s assistant head coach at Tulane. He rejoined Brown at North Carolina as the Tar Heels’ offensive coordinator in 1996, and followed him to Texas in 1998. He ended up being the country’s second-highest paid offensive coordinator in 2008, but resigned after the 5-7 season of 2010. Blessed with solid quarterbacks to work with at Texas, from Major Applewhite and Chris Simms to Vince Young and Colt McCoy, Davis’ time in Austin was marked by high success.

Harsin arrived at Texas as one of college football’s rising coordinators, following a successful four-year stint running Boise State’s offense to a 61-5 record and two undefeated seasons. But there was a dropoff at quarterback – the on-again, off-again era of Garrett Gilbert, David Ash and Case McCoy – and Harsin left prior to the 2012 Alamo Bowl to succeed Gus Malzahn as Arkansas State’s head coach. He’s now coaching Boise State.

When Harsin left for Arkansas State, it was Applewhite who called the plays in Texas’ 31-27 win over Oregon State in the 2012 Alamo Bowl. His one full season as the Longhorns’ play-caller was 2013, Brown’s final year. Texas was 8-5. He left when Charlie Strong took over the program at the beginning of 2014 and is now Tom Herman’s OC at Houston.

After developing Teddy Bridgewater into a first-round NFL selection, expectations were high. But Ash was lost for the season in the opener, and the offense went south as Tyrone Swoopes learned on the fly; Texas hovered near No. 100 nationally for all major offensive categories. And his final two games calling plays were disasters – an effort of only 59 total yards in the 2014 Texas Bowl loss to Arkansas and this season’s 38-3 opening loss at Notre Dame.

Norvell, who came to Texas in the offseason from Bob Stoops’ staff at Oklahoma, took over play-calling duties the week of the second game. The running game enjoyed a bounce back, and Norvell is credited with reinventing Swoopes into a short-yardage specialist. Still, Texas was 5-7 and Norvell was also there for a 7-point effort at TCU, and the shutout loss at Iowa State on Halloween.

How Texas has ranked nationally in key offensive categories, beginning with the season following the 2005 national championship win over USC, and who spent that year calling the Longhorns’ plays

Texas recruiting trail: A closer look at the trenches

Longhorns in the NFL: Week 17