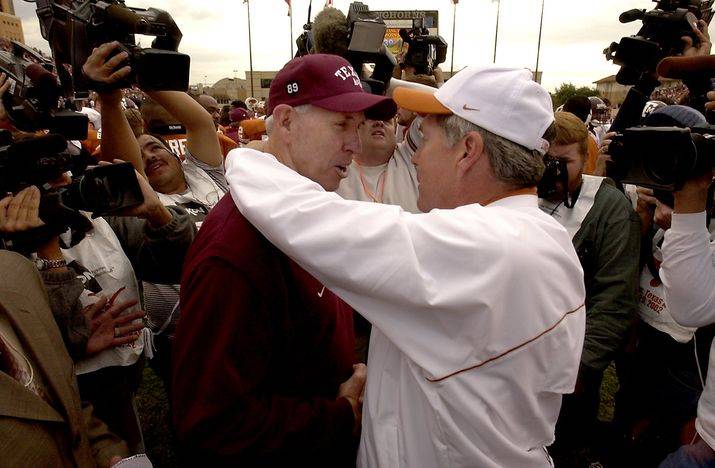 Here are a few Texas highlights from Kirk Bohls’ most recent column:

On the Big 12 Championship Game question:

Big 12 Commissioner Bob Bowlsby is optimistic that come Wednesday, the league will receive approval to decide whether to have a championship game in football. “I think we will negotiate an outcome with which we can live,” Bowlsby texted Tuesday morning. The Big 12 needs eight votes to get its bid passed and has four of them from itself and the ACC, a co-sponsor of the bill. One thing that could work in the Big 12’s favor is support from the Group of Five leagues, which don’t want a desperate Big 12 trying to expand and looking to poach two of their teams. In the NCAA’s new autonomy era, each Power Five vote counts twice that of the Group of Five members. It would take a simple majority of the 10 FBS conferences to pass the measure Wednesday.

It’s looking more and more as though Texas’ best bet for the basketball postseason will be the NIT. Taking a 1-2 record into Tuesday night’s home game against Iowa State looks even scarier because the Longhorns lost to the two most beatable Big 12 teams on the road and have yet to play any of the top four teams in the league. With the loss of his frontcourt after this season, Shaka Smart’s breakthrough year might not be until Year 3.

7. Mack Brown said if he ever coaches again, he’ll look at his relationship with the media much differently. “I also learned a whole lot more about your jobs,” he said. “If I go back, I’d have a different feel for the media. It is hard. You’ve got to come up with something nobody else has got and nuggets to get people’s attention. And it is tiring.”

Texas baseball No. 23 in preseason poll