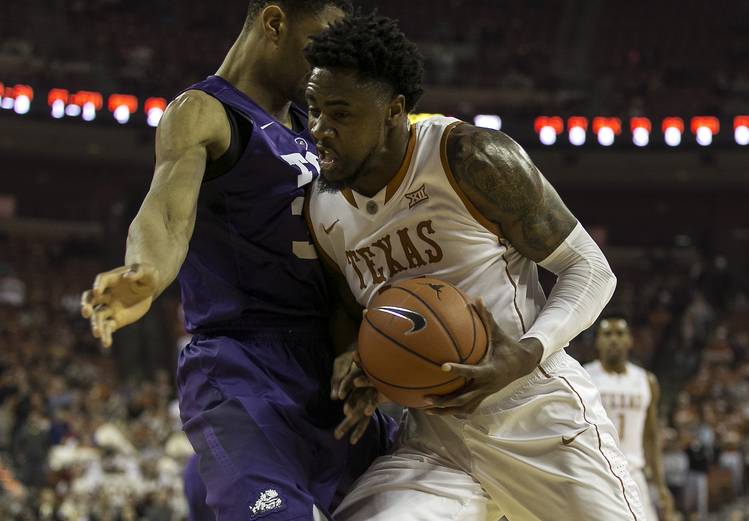 Texas' Prince Ibeh runs into TCU's Karviar Shepherd along the baseline during the first half of NCAA basketball at the Frank Erwin Center on Tuesday, Jan. 26, 2015. RODOLFO GONZALEZ/AMERICAN-STATESMAN

On Saturday, the Texas men’s basketball team will host Vanderbilt in the Big 12/SEC Challenge. The Big 12 has done pretty well in these non-conference challenges, going 41-27 since 2007 in “challenge” series against the Pac-10 (now the Pac-12) and SEC.

In the current Big 12/SEC Challenge series, now in its third season, Texas has split its matchups. The Longhorns lost to No.1-ranked Kentucky in December 2014 and  beat Vanderbilt in 2013.

Overall, Texas is 4-2 in these “challenge series.”

This is the first year the conference decided to move the event from December to January, placing the series in the middle of conference, which isn’t pleasing  some Big 12 coaches:

Oklahoma State's Travis Ford on #big12 #sec challenge: 'gets us a little publicity, but i'm not sure how much more exposure big 12 needs.'

Kansas' Bill Self not crazy about timing of #Big12 #SEC challenge: 'don't like disruption to our league schedule. it is great exposure.'

Here are five memorable Texas matchups from the “challenge” games since 2007.

The Bruins were in the middle of their run of three consecutive Final Four appearances and ranked No. 2 (No. 1 in the coaches poll) in the nation during the first-ever Big 12/Pac-10 Hardwood Series. UCLA was led by guys named Kevin Love and Russell Westbrook and had a 25-game home court winning streak. But the combo of Damion James, D.J. Augustin and A.J. Abrams won the day for the Longhorns.

James’ dunk with eight seconds left was the difference as the No. 8 Longhorns won. Of course, UCLA did go on to earn a No. 1 seed in the NCAA tournament and reach the Final Four. Texas didn’t fare terribly either, gaining the No. 2 seed and reaching the Elite Eight.

And there’s this video of this guy breaking down the game:

Texas entered the game ranked No. 8 in the country, while UCLA, with a retooled roster after losing Westbrook and Love to the NBA, was ranked No. 12. The star in this game was Austin native  Abrams, who scored a career-high 31 points. UCLA standout Daren Collison led the Bruins with 22 points. Abrams tied the game at 62 with a 3-pointer with less than three minutes to play and sealed the win a pair of free throws moments later.

The last six minutes of that game:

We include this game because after the way Kentucky disposed of Kansas a few weeks earlier, and UCLA afterwards, few thought Texas would keep the game close. Kentucky, without much overblown hyperbole, had the greatest college basketball team of all time that didn’t win the national title last year. Their only loss came in the national semifinal to Wisconsin.

So the fact that Texas was tied with Kentucky at 26 on the road is impressive. And Texas wasn’t exactly chump change at the time: The Horns were 7-0 and ranked No. 6 in the nation, but Kentucky was perceived, and rightfully so, as the vastly superior team.

What’s even more impressive for Texas is that the Horns hung with Kentucky without their best player, Isaiah Taylor, who had a broken wrist.

Jonathan Holmes scored 14 to lead the way, but Kentucky’s Willie Cauley-Stein had 21 points and 12 rebounds to lead the Cats. Click here for the whole game.

A little more than two years ago, the Big 12/SEC Challenge started. (Unfortunate that the conferences couldn’t put forth Texas-Texas A&M to kick off the series, but I guess college basketball is not a popularity contest with milk and cookies, as Kansas’ Bill Self would say). But Texas-Vanderbilt provided a pretty thrilling game.

Taylor, then a freshman, scored 14 points, and Demarcus Holland and Javan Felix had 12 points apiece as Texas held back Vanderbilt late. The Commodores were led by Austin native Eric McClellan (a former Austin High Maroon), who scored 22 points in his homecoming.  With 2:30 left to play, Vanderbilt had cut a big Texas lead down to 57-54, but Taylor scored five points down the stretch and Texas took an eight-point lead with less than two minutes left and won.

Well, this game wasn’t exactly a classic, but the only other game to choose from was a 73-56 win by USC the next year, so we chose this Texas beatdown of the Trojans.

Texas led by six at halftime and soared in the second half. James scored 19 points and Dexter Pittman had 13 in the win. Pittman also went off for seven blocks in the game, one shy of a school record. USC was in a transition at the time with first-year coach Kevin O’Neill taking over for the scandal-filled Tim Floyd era, but the Trojans still had future NBA player Niola Vucevic, who scored 18, on the roster.  Texas forced 17 turnovers in the game.